When wandering through the local Half Price books a few months back (ostensibly to just buy Divergent for the daughter), I stumbled on compilation copies of a part of the Grimjack comic series (Legend of Grimjack, Volumes 1-3). I'd first read the series in the late 80's when sharing a house with a comic-hound (I was also exposed to Moore and Miller, Chadwick's Concrete, early Grendel, X-Men, etc. during that time). The series was written by John Ostrander and inked by Tim Truman, and was one of the original series produced by the now-defunct First Comics. Grimjack started out as a backup feature in First's 'Starslayer' comic, but rapidly gained traction and was granted his own standalone series. The series ran for 81 issues between 1984 and 1991.

The series opened up my mind for its setting - the pan-dimensional city of Cynosure, where realities met, popped in and out of existence, and generally mucked things up. Humans rubbed elbows with fantastic creatures, aliens and gods. Magic worked in one block, technology the next. A wise brawler carries a blade and a gun, in case one or the other failed in some pocket universe hidden in a alleyway. The next closest setting to this that I had read were the Terri Windling 'Borderlands' books, but Grimjack took the setting to 11. The comic storylines are a mix of pulp noir, detective, sci-fi, fantasy, and general gonzo.

Grimjack (née John Gaunt) is a sword-for-hire within the City. He's a weathered and scarred veteran of the city's gladiatorial pits, police department, and secret police. When we meet him, he is typically at his table at the back of Munden's Bar, nursing a glass of whiskey, accompanied by Bob the Watchlizard.

And as any good noir lead, he has a passion for 'his' city, a certain sense of honor, and the ability to unleash violence in defense of either.

The writing, of course, has a certain cheesy pulp air to it:

"She was wrong, of course. I use half-truths and lies as much as anyone. But give me any glimpse of the truth, any shade of it at all, and I have to have it... You can ignore the truth if you want, But first you have to know it. I know no other way that's worth living."

(upon receiving a 'decicred'[small coin] from a destitute boy to help his family) "But nobody'd ever offered their entire bankroll to hire me before. Made me feel overpaid."

"What the holy hell? I'm a goddamned beaver and my hog's a frog!"

"Well, they wuz the nastiest bunnies I ever run up against. I'll give them that." 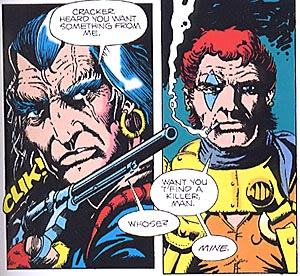 Anyway, Grimjack, and more importantly, Cynosure, was an influence on my paltry early attempts at writing. The idea of overlapping realities and gateways between dimensions and worlds, especially with such chaotic effect, seemed like an excellent milieu. I may or may not have written stories about a wanderer who passed through a city-space with certain resemblances to Cynosure.

Likewise, in a game world, an unpredictable chaos effect of overlapped dimensions could add character and complexity. Certainly, a system like Shadowrun was built on this environment-scenario, but any weird science-fantasy game setting could have the play-space to make it work:

For instance, an alien priestess arrives in Cynosure, seeking the god who abandoned her people in their time of need. The 'god' turns out to be nothing more than a local ne'er-do-well who found himself in her world, where he gained godlike powers. Likewise, when a rival god arrives to defeat him, that god is reduced to a mortal in the harsh streets of the city. 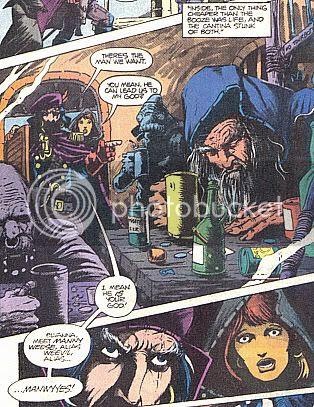 Grimjack defeats foes on multiple occasions by understanding/recognizing areas where technology and/or physics rules are altered, and taking advantage of them.

The city of Cynosure is a gateway to other dimensions, including Hell itself, and forwards adventures or acts as a plot mechanism, as well.

And, through the 'Munden's Bar' side stories, we learn that vampires are susceptible to lima beans...

Grimjack is probably one of those unheralded influences on a number of other works.  I know at least one indie supplement that calls out Grimjack as an influence, and with some research, there are probably plenty more.  The malleability of realities has always been a wonderful trope in literature, especially of the graphic genre, and incorporating it into the gaming world is not a big stretch.
Posted by Vance A at 06:38