I seem to catch the Secret Santicore group project every other year....  But I remembered to enter Santicore 2017...

Well, Santicore 2017 came and went, and it seems that the editing process is a bit delayed.  So putting my contribution out as a bit of content...

"Oh great and dreadful Santicore,
I gaze upon your visage with reverence and wish that you wouldst grant this lowly mortals request. I request with such respect as to make other respectful people look as though they aren't, that could you please make me a jungle based encounter.
I lay myself at your feet as your lowly humble servant.
R"

So off to the jungle we go, in search of illusory foe....

And the name?  Well it came from one of those paint samples that you get at the store.  I've never quite figured out how the color names are generated, or how they reflect anything in the real world.  But of the green-tinged color chits I happened to be sorting through at the time, it seemed to best fit a small jungle excursion.
Posted by Vance A at 20:15 No comments:

Well, in spite of Max's "help," I was able to concoct and submit this year's One Page Dungeon Contest entry in record time.

After several days of considering how to include the theme of "Sustainable Dwarves," I shelved that concept for another time.  So let's see what transpired...

Strayed from the last couple of years' hexcrawls and went small.  And low-fi.  0-level low, that is.

"It's not every day that you take the loot back to the dragon. But he did give you an offer you couldn't refuse..."

It's the 10th year of the contest, which is pretty damn cool. And the support/sponsors/enthusiasm is impressive this year.  Enjoy!

It's been a while (just over a year, sheesh!) since I last did a list of 'Lost Tomes,' so this was a fine inspiration to dig in my notes and gin up a few bits of the written word for your adventurers to find or seek.  So here's seven more for the library:

1. The Caldrie Registry: An old wedding contract blessed by priests of the Wooded Lands, the scroll records the marriage of the last of the First Rangers, Veeder Caldrie and her husband, Elburg Caldrie. As was the tradition in those days, he took her name, thus extending the matriarchal line, and reinforcing his place as an outsider in the Woods. Though the courtship and wedding was established in love, it soon soured, as Elburg chafed at his place as a second-class citizen within the Lands. The Conflagration of 1088 and the subsequent invasion of the eastern Wooded Lands by chaos forces was blamed on Elburg's jealousies, and he was scapegoated, driven from the lands and his family...

2. The Agekel-sam:  Found within an abandoned elfin redoubt deep within the Seral Forest, the book is filled with an elaborate, curving script that shimmers and causes the reader to go dizzy. Non-fey readers must save or; 1) go mad; 2) go blind; 3) stare into the book, eschewing sleep or sustenance until dead; or 4) become possessed by the soul of a deceased elf. The script is not written on the page, but is "projected" onto it from the fey dimensions, a message from elfin lords that have passed on to the Rimlands. The script morphs and changes over time, reflecting the mercurial messaging and philosophies of the Rimland elves...

3. Jared's Open Book: An indecipherable journal, found within the ruins of a itinerant alchemist-wizard's lab. The pages are stained, corroded and singed, outcomes of being too close to experiments both successful and failed. While several sages have attempted to unravel the script, it is not clear if the odd characters are an invented alphabet, or some foreign, alien language. The letters do not appear related to any known alphabet, leading some scholars to believe the script to be the fabrication of a madman. Others see too many connections and patterns, and believe the author to have been an individual displaced from location and perhaps even time. Artifacts and fragments of equipment found within the blasted rubble of the land suggest the latter. Early witnesses on site after the blast noted that the building had imploded, rather than exploded, as would be expected from the typical alchemist's failed experiment...


4. Druidic spell-tube: "Careful, Sermos.  That there scroll tube was crafted up by the Druids, for holding their esoteric spells on what odd leaves, carved sticks, or rune-scribed bones that one of those 'nature-boys' calls a scroll...  Now don't be puttin' your fancy arcanist scrolls in there.  I hear tell it will eat the spell clean off them. Or spit them out as frogs. At least that what my auntie told me..." The scroll tube, fabricated from a combination of tree cambium and vines, and kept alive through druidic preservation magic, fortifies the magic held within a druid-crafted scroll (a great rarity). Due to its animist energies, the scroll tube is hostile to any arcane scrolls placed within, ripping the spell from the parchment within 1d4 hours.


5. Molphilius' Soul Book: At the moment of death, the soul and personality of the lost mage was transferred to his old spellbook, where he still resides.  The book will be found in some forgotten, dusty corner, or among a boss-monster's treasures. If found/rescued, he will initially be grateful and gregarious, eager for word of the outside world. This mood will fade quickly, and he will soon chafe at his situation. While he may incant any of his known spells (random as per 7th Level MU), he is, as would be expected, a cranky old bugger, and may only acquiesce to assisting his 'bearer' under duress. At the first opportunity, he will attempt to charm his bearer into assisting him in his quest to locate a vivimancer of sufficient power and knowledge to reinstall him into a living body.


6. The Pelagic Psalter: Contained within the salt-and-iodine reeking pages are a lyrical history of antediluvian times. The book contains the languages of ancient sea-going creatures that troll the abyss, only arising once a century to feed at the surface before descending back to the lightless depths. If one is fortunate enough to encounter one of these massive, languid creatures, the reader may hope to use the book to exchange a few pleasantries or gather a tidbit of wisdom from before the time that feet trod the land.


7. Danroth's Album: A spellbook for conjuring the Paper Dragon (HD 2; AC 5 [14]; Atk: breath as 'shard's of paper causing minor cuts (1d3), save or blinded for 1d2 rounds; Move 12 (fly); Special: golem resistances, double damage from magical fire.) Each book will contain pages sufficient to create 1d4 dragons. As a golem, the 'dragon' will follow simple commands, including acting as a guard, retrieving small items (up to one pound), and performing minor scouting. An individual dragon is not durable, and will degrade within two weeks if not damaged otherwise.

I've occasionally opined on the geologic environs with respect to D&D, so, yeah, this is pretty much truth.... 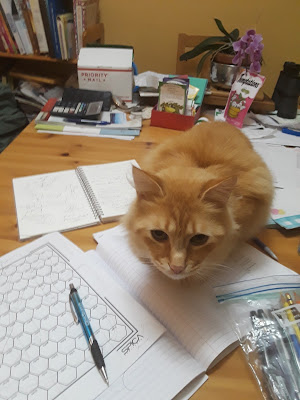