The Abbey of St Martin, an experiment in scaled adventure.

When I populated my three little towns, I had intended them to be part of a hex, with a few adventure locales to explore and exploit. I'd grabbed a few Jackson locales that seemed to fit the bill, but when I filled them out, the adventures didn't seem to gel, or have a consistency that would place them in a close region. Or maybe it's just me. So no hex got filled, and the four adventures idled.

So out they go - either as standalones, or maybe somehow connected. We're not sure.

First up, the old abbey off the road, haunted by its former tenants, and perhaps a more malevolent force.

A couple of design notes. First, this is an experiment in a 'scalable' adventure. For two of the encounters, I've modded them for a solo PC, a few 1st level mooks, or a few 2nd-3rd level adventurers (assuming a B/X or similar system). At each level, they should still be a hazard, but (I loath to use the term) 'balanced' to give the respective parties a good go. The remainder of encounters and traps remain the same. Let's see if this works.

The old abbey is a two-story affair, with damage and decay appropriate for a place abandoned a generation or two ago. There's a scary baddie in there. And while there isn't a significant treasure lying about, the value of the place comes from a potential resource. Something to return to periodically, provided the PCs interact with the resource appropriately... The PCs may also choose to use this structure as a retreat or base (temporary or permanent) as the campaign requires. Like a 'ruined tower' or similar, having a place in need of restoration can jump-start a bit of domain thinking.

Who's living in the Abbey?

Let's travel down the West Road a bit farther from Stoneash, and well inland of Dawold.

Neuförde was on the cusp of growth when the spring floods undid those plans by uprooting the town's bridge, forcing trade and travel to other crossings. Understandably, most folks are eager to get the bridge rebuilt, but the summons for an engineer to supervise new abutments has gone unanswered.

Neuförde is a bit larger than the prior two settlements, ranking as a hamlet. Basic provisioning and lodging is available with an established inn and trading post, as well as craftspeople suited for supporting a (hopefully) burgeoning river crossing and future market. The settlement's mayor, Johannes Stroemen, will take interest in any adventurers who visit the town, and may point them towards locales needing investigation or clearing. A pair of odd elves occupy a tower, but may be willing to offer some services in identification or other arcane practices. No temple yet, but a couple of missionaries have set up shop with hopes of constructing a place of worship once the building site is consecrated.

And several halfings have recently set up shop in town. Creepy little buggers...

Today's deity was inspired by another early 20th century artist, Harry Clarke. Clarke's illustrations grace a number of fairy tale collections, Edgar Allen Poe stories, and a translation of Goethe's Faust. "Garond, the Judge" is inspired by a piece from an illustrated poetry collection titled "The Year's at the Spring." Clark's works have been used as illustration/inspiration pieces in other RPG products, and I first saw his work used in The Necropolis of Nuromen.

Beware: Bridge Out Ahead

Stoneash, the next town down the road...

Next in my little collection of places and people comes Stoneash.

The thorp of Stoneash is mentioned in the Dawold Tower town descriptor as a next stop or a possible resource for PCs interested in reconstructing the tower (in the form of the local stonemason).

In my imagined hex, Stoneash is approximately six miles up the road, and sits on a belt/trade road known locally as the West Road. The West Road connects the settlements in the area, and forms a rough boundary between local control and the "wilderness."

Like many small burgs, the residents of the town have aspirations, and although no particular threat or limiter has kept the town from growing, it seems that settlement and development has stalled. Perhaps there is some rumor or force keeping the town from recruiting more settlers, or a yet-to-be-determined threat has halted its growth. A recent tragedy has also robbed the thorp of one of its necessary crafts-people.

The town is a bit more established than Dawold, and has a few more resources and personalities to interact with. A guard-post implies some contact or oversight from the area hierarchy. The inn provides a place to lay over, and perhaps pick up some news or a spare hand. And there is the local clergy, with their own deity, again inspired by a Henry Justice Ford piece (For a fistful of other inspiration sourced from Ford's works, check out the Ford's Faeries project).

A note on "classed" NPCs in this and the other settlements: Where there are two classes denoted, the first refers to a suggested BX-type race-class category, with the second being the distinct class per other versions of Ye Olde Game, depending on how one chooses to interpret the various actors.

"You have acquired the deed to a ruined tower" redux

So I haven't posted for a bit. But I haven't been idle. I was trying to work up a hex of a few small frontier towns and areas of interest. But it just wasn't gelling. So I have several locations to post. I'll trickle them out over the next bit - I've been having a difficult time sharing, not sure why. Let's just chalk it up to some winter malaise....

One of my favorite outcomes in Donjon's "Pickpocket Loot" random generator is the "Deed to a ruined tower." So much so, that it was the inspiration for my 2017 One-Page Dungeon entry.

And lo and behold, Jackson had one floating about in his back catalogue. A tiny coastal settlement with the remains of a tower on the edge of town. 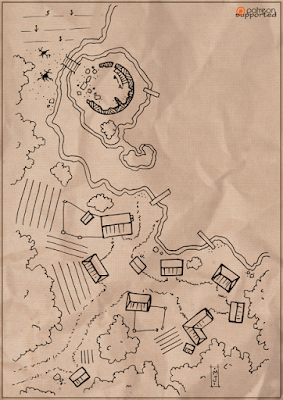 So add a bit of a setup, and a collection of personalities inhabiting the thorp of Dawold. In the spirit of some of the original village modules, everyone has a brief description, a touch of personality or agenda, and a stash of coin, just in case the PCs decide to just rob the town. You never know.
I wrote this, and two other small settlements, with the intent of linking them along a frontier road. Interestingly, all three ended up with a theme of a frontier town whose development was stalled or inhibited due to some factor. In Dawold's case, the tower was to be the anchor for a small port and watch on a wild coast. A bad omen had put an end (maybe) to that aspiration, and with it, the settlement's growth. Not that at least a few of the residents don't mind the low profile.
I also made some notes and suggestions in case the PCs decide they really would like a tower with an ocean front view. After all, where's the fun in waiting until name level to have a killer pad? (The next town down the road is also referenced with respect to the tower build, stay tuned)
And, after I wrote up the three towns, I realized I'd made up a different randomly-named deity for each local preacher to honor. In the spirit of the Expanded Petty Gods project, it was a moment to write up someone new to worship. (Crap - just discovered that the original EPG project has been pulled from Lulu and DriveThruRPG over a potential copyright infringement. A shame - it was a great example of the group mind of G+ and a few people's dedication to move the project forward). That said, a piece of art from Henry Justice Ford served as inspiration for "Butia of the Field." Similar art and associated deities will follow with the other two towns.
Download your own ruined tower!
More to come...