Razing the Zombraire's Estate, plus a mini-review of the BFRPG Adventure Anthology I

It's Halloween season, and I needed a seasonally-appropriate adventure for the PCs to kick around in. I reached out to the Reddit hive-mind for some suggestions, and received a few recommendations in reply. One suggestion was "The Zombraire's Estate," available in the Basic Fantasy RPG Adventure Anthology I.  Of course! I have this collection and had looked over that adventure before. After all, it has zombie chickens. What's not to love? So be it. They're fighting zombie farm animals.

In good one-shot fashion, I dropped the PCs off on a lonely road with an encroaching storm. Spotting a "convenient" walled estate in the distance, the party approached along the somewhat overgrown track to the compound. As they neared, they spotted an abandoned cart by the open gate. Rising from the cart were three human skeletons, and a skeletal mule, which proceeded to attack. The party bashed down the skeletons, and Bonk decided to attempt to ride the skeletal mule. Because of course. Adjudicating a morale roll, some cleric turn undead rolls, and a bit of armwaving, we determined that Bonk was able to mount the mule for a round or so before being bucked off and the mule clattering off into the woods. So much for undead riding animals.

The combat was observed by a raven, who introduced herself, asking if the PCs were good people? In this case, I had both an NPC name and voice model. The raven convinced the party to follow her into the woods (nothing bad can come of this) to meet her friend Lucy. Lucy (i.e. Luacia) was a forlorn dryad in a diseased grove, affected by the undead energies of the estate. Entreating the party for assistance, she got on their good graces with offers of a bless spell, and after a rest, they assaulted the old estate. Climbing a ladder to peer over the wall, Stumbleduck spotted a meandering zombie and took a pot-shot at it, sticking it. The zombie continued to do zombie things (apparently gardening...).

Not satisfied with creeping about, the fighters in the party trooped to the main entrance and laid into the zombies directly. Staive attempted a turn, but couldn't get a good signal. The gardening zombies were dispatched. The party inspected the odd undead plants of the garden, opting not to steal any vegetables.

They recovered a "shiny" sword embedded in a skeleton's ribcage and noted the miasma rising from the estate's well. Entering the barn, they observed zombie farmers milking zombie cows. As you do. Staive's turn worked this time, and the party was able to dispatch the zombies, as well as put the cows to their final rest. Jaynie found a "shiny" trident imbedded in a haystack, after being ambushed by a giant rat. Bonk took the trident, thinking it had a familiar heft to it. Jaynie also recovered a silver milk pail. Once she dumped out the grey slop of zombie cow milk, of course...

Staive discovered a coop of zombie chickens and proceeded to despondently dispatch the undead cluckers. Strange gold-filled eggs were recovered.

I scheduled a last-minute game on Sunday night, as I was in the need to get out of the house and be sociable. I'd talked to an acquaintance who nerds out with me occasionally at the brewery, and he didn't have other game conflicts. Mike's a player since 2e and currently in a couple of 5e campaigns. I also posted up on Meetup and messaged a couple of my other attendees to let them know that a game was afoot. Ross, who's played before (relative novice) signed up, as did a new player at the table (Carmela).

We gathered, and the three picked through the pre-gens. Mike picked an elf, Ross a dwarf, and Carmela a halfling. Here we go – PCs, with Random Headgear:

I dropped them at the gate of Thoring Keep, with the keep's background and rumors of activity and disturbing sightings. The party decided to hide in the treeline and wait until dusk to investigate. A random critter roll spotted a “Broken Thing” (very weak summoned demon) scrambling around the walls. Jaynie crept up on it and one-shotted it with her crossbow. The party looked it over, determined it to be unnatural and Pepto set it on fire as an abomination. Finding stashed gear and a pair of fire rings, they determined that a number of individuals had been camping in the ruins and possibly disturbing the place. The party did a quick reconnoiter of the keep's yard, observing the evidence of subsurface collapse, and finding the remains of a long-dead bandit.

In retro-clone games (or equivalent early-edition D&D), PCs don't have a significant number of traits or what may be considered “feats” outside of a few class- or species-specific qualities. Character customization is generally non-existent outside of role-play. And “builds” are non-existent (thank the dice gods.)

However, I like the idea of adding color or “knacks” to PCs, without over-building them, or making the feats “be” the character. After all, the character “build” should come through play and experience, with an emphasis on discovery rather than pre-design.

In Old School Feats, Eric Diaz has attempted to provide some options to differentiate characters within the classes without breaking the game or classes. 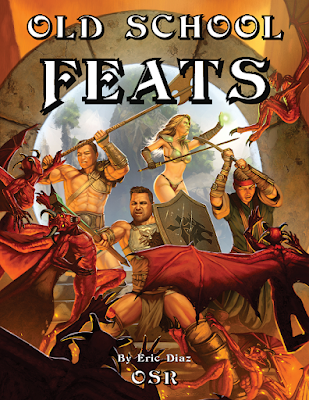 The feats in the supplement provide modest amendments to the four primary character classes (cleric-fighter-mage-thief). The feats don't “ladder,” that is, a prerequisite feat isn't required to select a subsequent feat. This is a good thing, as it avoids the “build” mechanic of later editions. Some feats are stackable, e.g. can be selected multiple times (These are typically associated with ability score improvement or similar).

The supplement feat lists are divided into “general” and class-specific feats. These are self-explanatory, but anyone can pick from the general list in addition to their respective class feats.

Fighters and thieves receive the most options to provide flavor to those particular classes (20 each), with clerics and magic-users having a more modest list of options. Several of the cleric and mage feats provide spell-like effects that could offset a single 1st/2nd level spell (e.g. limited bless or magic missile equivalents). Again, since these are low-level, and modest, they don't break anything.

Post-Game Report: Neuförde Gets Its Bridge...

Sunday Game Recap, for those of you who are following along at home. We had three Repeat Offenders, and two new folks. One of the new was brewery staff who'd been told by her manager that she needed to spend part of her shift trying out the game. If we all had bosses like that...

As is my habit, I had the two new players roll for Random Headgear. Staive found himself wearing a dark grey Bedouin-style wrap, and Denna wears a fabulous top-hat. Because of course.

The party started in Neuförde, their current base of operations.

Bonk used some of his gold to upgrade from leather to plate (I rolled that a suit was available at the trading post). Due to the shady background of the local halfling merchants, it must have fallen off a wagon...

Hanging in town, the party decide to go find the hired engineer who was to direct the reconstruction of the washed-out bridge. The bridge (a feature on the original town map) has been a running issue, and said engineer was tardy on arriving to town.

(I'd outlined this session mentally, so was prepped, at least in a skeletal fashion)

The party elected to make the two day trip downriver on an available trader's flatboat. This was the biggest river Bonk has seen -

On the first day, the wandering monster roll came up positive (from the OSE reference booklet random monster table): ankheg. I didn't feel it was appropriate to physically encounter the critter, so treated the “encounter” as spoor. The party noted the burrows along the shore and assumed it to be very large nutria.

Greetings from the Applegrove Parish Chamber of Commerce

Over on the OSR Pick-up Games Discord, users came up with a "Make a Town" jam for a bit of a creative exercise, and to follow up on an earlier "build a class" jam.

And I do like making up little towns out in the hinterlands. So let's have at it. Jackson threw out this offering some time ago, and it's been in my prospects file. The name came from the wife after looking at the trees. That, and some random resident generation is good enough.

I tend to refer back to Hommlet as my town format/content inspiration. So like a number of other towns, Applegrove Parish has a number of named residents and their relationships, an inn, temple, and the local god described. Some of the residents have mineable backstories and at least a couple are more than they seem at first glance. Of course...

And there are a couple of random lists as to who is passing through town, and what might be found or rumored in the area.

So enjoy your stay in Applegrove Parish, and beware of errant gnome creations.