Haven't drawn up a town/village map for a while, and I finally have my own office/creative space in the house, so christening it with a piddly little village map with a bit of dressing on the side.

Built at the confluence of the North and South Forks of the Orryn River, the eponymous riverside thorpe grew up around what was originally a small blockhouse used to oversee the river trade and project force against river pirates and raiders. The blockhouse was reconstructed as a stout stone tower as the Duchy expanded its territory, finding itself in need of a more resilient frontier watch. The Ring Road marking the Duchy’s current extent also crosses through town, with a small stone blockhouse guarding the road, and collecting small tolls from commercial loads using the road and bridge.

The village is a waypoint and dock for the shallow draft barges that are poled upstream. A jetty built into the bank of the South Fork creates a small impoundment and docking area for the barges.  The North Fork of the Orryn is generally too small for significant navigation.
Most of the buildings in the community are wood-framed, with several roofed with local red and gray slate.

Asat Ildusker (Ftr5, 22HP, plate/shield, +1 longsword, light crossbow, 391 GP, potion of Fire Resistance) considers the post an honor, protecting the flanks of the Duchy and keeping watch on ‘his’ river.  Accordingly, he keeps his troops well-drilled and disciplined, and is a stern, but not unsympathetic arbiter of local legal matters.

A domed temple to the local river gods squats along the road. In front of the temple is a shrine to the gods, polished by generations of travelers’ hands touching it as they leave the river’s environs, praying for luck on their journeys along the Ring Road. For every person touching the stone, there is a 1 in 6 chance that it imparts a small (one day) boon to the individual: 1) +1 to all saves; 2) protection from evil; 3) luck (re-roll one failed roll); or 4) 1d4 temporary hit points. The temple is administered by Sister Gwynn (Cl3, 11HP, plate, +1 staff (holds one additional 1st level divine spell/day), 103 GP, tourmaline holy symbol (120 GP), two potions of Cure Light Wounds).

The warehouse and trading post along the river has a good stock (85% chance) of standard adventuring items and supplies at 1.5 book price.  Per Kelasos and his wife, Trina, have owned the establishment for 20 years, inheriting it from her father (41 GP, 76 SP).

“The Pilgrim and Flask” inn is owned by a heavyset halfling, Dannay Burrfoot, who employs members of her extended family from a nearby commune. The inn, like other structures in the settlement, is built of heavy timbers with a red slate roof. Lodging is a simple common room with cots. The inn has an attached stable. Burrfoot will have 1d4 horses and/or mules available for sale – animals either left by travelers or impounded/pawned by the halfling from destitute souls (31 GP, opal medallion (40 GP), 111 GP buried under stable floor).

Adventure prompts and/or rumors:
1) The gnomes have been spotted with a barge that needs no poles or rowing – the Bargers Guild is greatly interested in a specimen for study.
2) A caravan hauling spice from the Woggan foothills has gone missing along the Ring Road north of town.
3) Odd coloration of the North Fork portents displeasure from the old river god.  Desecration of the sacred headwaters is suspected.
4) Ildusker approaches the party in need of discreet scouts to investigate rumors of a druidic cult raising forces along the frontier.
5) Ordyn has heard rumor that a former dalliance is of royal blood, and needs more information. Any bastard child could be a political complication.  His pendant is a gift from the former lover.
6) Hunters and outriders have spotted undead near an old battlefield past the border, and mysterious cairns have been thrown up around the grave barrows.
7) Copses of trees have been suddenly dying.  Sister Gwynn senses that it is more than a simple disease or infestation…
8) Bulettes are migrating into the area, causing much alarm for the halfling community just over the border.
9) Scouts of Chaos forces have been reported in the area.  Waylaying or dispatching these squads, as well as better understanding the threat, would be quite valuable to the realm.
10) Smugglers may have absconded with a relic from the capital’s chief temple.  They may be following local trails to transport it out of the territory.

Back in October, while looking up images of 'chicken foot' on the Google as a model for my most fabulous Inktober the 10th sketch, this image popped up in the results....

What in the complete hell?

Apparently, there is a Vietnamese breed known as the Dragon Chicken, valued for its thigh meat and able to fetch extraordinary prices on the market...

I mean, look at these beasts...

But not quite the 'Dragon Chicken' one might expect in an RPG world... 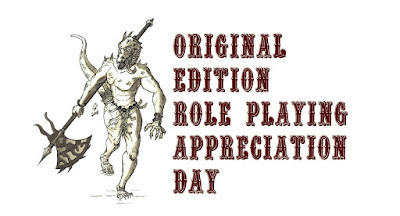 Another self-imposed creative deadline based off yesterday's 'notebook' post and cobbled together to support the Original Edition Role Playing Appreciation Day coordinated by +RJThompson.

So here you go, a small silly character class, done somewhat in the style of +JamesVWest, although without the whimsical art.

"Heralding from the mysterious arboreal fighting arenas of the fey, as a fairy gladiator, you are a raw yet skilled fighter with your own racial talents… Unlike your flighty kin, you are a tough little bugger, able to dish out a beat-down with style and aplomb! May Mars guide you!"

Happy One Page Dungeon Deadline!  162 entries this year, a strong showing, and from what's been posted up so far - a high level of competition.

Pushed out my entry earlier this month.  I can't speak to its quality - that's the judges' domain.  My writing discipline has gone downhill over the last while, so I made a self-imposed deadline to get the entry out the door well before May 1.

The entry began with a beer and and empty notebook page...  which descended into a freewriting/brainstorming session:


For those of you who don't want to read my writing (and even I can't figure out a few words), the list is, more or less:
In the end, elements of bullets 2 and 20 (and hopefully 16, 18 and 19...) made it into the entry.  There are a few more notebook pages of brainstorming and distilling...

And now I want to design a "Sustainable Dwarves vs Industrial Druids" adventure.  It will somehow involve weaponized windmills.

Bullet 10 always hearkens back to the classic A4 slaver module.

And my wife wants to play a fairy gladiator PC.  Look for stats on that momentarily...