Was cleaning up my writing files a few days back and considering expanding on a prior project when I noticed a rogue document with an April date. Looks like I started working on infesting one of Jackson's map, then dropped it when work got crazy. Appropriately - it looks like one of his "CoronaCon" maps. Forgot where I found it. Welcome to my brain.

So I revisited the map and started revising. Shifted a couple of features about and set up to finalize. And then I noticed three more rooms. Welcome to my brain.

That said, I'd started down a 'four elements' path, so better shoehorn in Air and Fire, since I'd already addressed Earth and Water.  And there's a totally unrelated statue of a jolly fat guy in a red suit... I'm sure it all makes sense...


And of course there are mushrooms.
Posted by Vance A at 11:37 2 comments:

What's Going on Down on the Priggin's Farm?

Heh, not sure what to say about this one, other than Tim Shorts left a pair of maps on Reddit for just anyone to do with what they will. 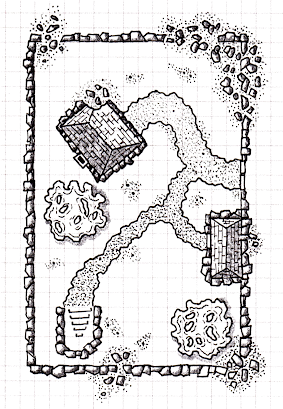 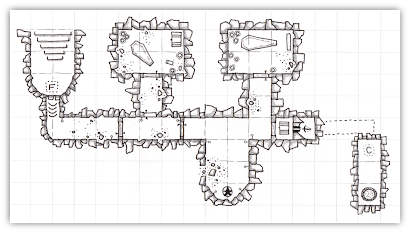 Like the last installment here, the maps are a paired surface/underground complex. And the residents? Well, they've seen better days, I suppose.

Spoiler on the underground creature-feature: I read somewhere in the blogosphere not long ago about re-skinning level draining undead, particularly for them-there old-school games, as level loss, especially with slower PC advancement, may be seen as an undue penalty (and a couple of level-drained PCs can quickly lead to a party death spiral). Alternatively, these undead attack ability scores, with death occurring with the score hits 0. While I don't specify if the loss is permanent, a few options may be offered:

3) Divine intervention: I'd suggest remove curse as a curative to such unholy drains on a PC.

Anyway, take a visit to the old Priggin farmstead, and have some fun with it. The residents can definitely be played as eccentrics of their kind, and perhaps things will take an interesting turn...

Well, my brain is still mush with a lot of work demands and long hours. And I've found that I'm putting off a lot of exercise, both physical and creative. So this thing has been floating around in my carry-bag since Dyson first posted it in May. Which shows my productivity...

So here's Dysons "Old Fort Ruins & Dungeon," as interpreted by me...

Not much to add here - no real deep creative process to unravel. I liked the interconnection of the surface space as an indication to the subsurface terrain (collapsed area) and its implications for exploration and geometry, and worked it into the narrative of the hows and whys of the adventure. Statted using B/X-OSE-adjacent methodologies. Or something like that...

I hope to get back to a better flow upcoming - looks like I'm over the hump on the current work project (although there are rumblings that I'm taking on a new task). A few friends are discussing a modest collaborative project, and I have a fistful of other maps scattered about to fill with denizens.
Hope this finds you all healthy and finding your own ways to keep creative and connected.
Posted by Vance A at 18:27 7 comments: