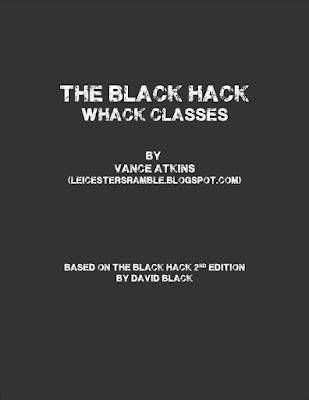 I tried to emulate David's original tone and style, as well as make each class simple and unique as befitting the game. 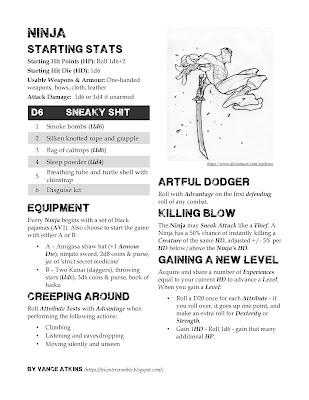 So take a look and throw a coin in the tip jar if you are so inclined.  Thanks!

I also uploaded a significant revision to my homage to B1, "Vobleavira Haven Complex"
https://www.drivethrurpg.com/product/279317/Vobleavira-Haven-Complex

I added encounters, cleaned up some text and consistency, and hopefully made this an improved and more playable product.
Posted by Vance A at 09:30 3 comments:

Glynn drew this. I wrote up some slapdash words...

Hailing from the Boglands of the south, or found creeping about in the temperate rainforests of the Northwet, the secretive wormkin make their way in their silent, mysterious societies...

Annelid-humanoids ranging in height (length?) of four to six feet, with spindly arms, their moist skin ranges from a translucent pale to dark red in color. Other than than light-sensitive organs around their head regions, the wormkin are essentially blind. Compensating for this, the wormkin have finely-attuned 'tremor-sense' for vibrations and an acute sense of smell. Because of their thin skin, wormkin require moist environments and are found in rainforests, humid caverns, and bogs. Some "invasive" wormkin have been encountered in city sewers and cesspools, although their reason for occupying such spaces in a mystery.

Their society is divided into three classes - Aporrectodea (Priest), Lumbricus (Royal), and Eisenia (Soldier). One will never encounter a single wormkin, as they always travel in groups, or 'congregations' of at least four individuals and up to 100 in verdant, humid locales.

Wormkin communicate via a subtle combination of vibrations and scents, and communication with outsiders is exceptionally difficult. There is a 20% chance that a Priest may have a rudimentary form of ESP, allowing communication with the Aliens, as they refer to any non-wormkin intelligence. Contact with these creatures is almost always a discomforting interaction, as any collection of wormkin seems to act as a hive-mind.


Special: Due to their squishy nature, blunt attacks cause half damage. Wormkin are highly resilient, though, and are immune to disease, including such things as vermin bites, molds, and mummy rot. Wormkin also have prodigious healing capabilities, recovering 1d6 hp per night of rest. Subsisting on vegetative matter, wormkin have evolved powerful gut enzymes, which can degrade natural fibers (cloth or leather) similar to a jelly or be spat in combat (15' range) for 1d3 hp damage.

Using their tremor-sense and sense of smell, wormkin can discern the distance and direction of a target accurately, and may may track humanoid or larger creatures at distances of up to one-quarter mile. Wormkin are exceedingly difficult to sneak up on, and any thief attempting to do so will make their rolls at two levels lower.

Soldiers and Royals may reinforce their bodies with a chitinous armor of unknown manufacture (AC6/13), and there is a 10% chance for individuals to be wearing ceramic armor (AC3/16). Because of the wormkins' anatomy, this armor may not be transferred to another species, nor will they manufacture, modify, or sell the armor to a non-wormkin. The secrets to these lightweight non-metallic armors is a hard-sought goal.

A congregation of wormkin may commune to effect a number of spell-like abilities - their so-called "Dirt Magic." At least one Priest is required for any spell ability, and a Royal is required for 7th level spell-equivalents:

2/"Quicksand" - cause a 10x10' area of soil to 'quick' enough to engulf a humanoid. If the target is not extricated, they will sink and suffocate in one turn. Each additional wormkin increases the diameter of the affected area by five feet.