Having a creative burst here, or more likely, finally transcribing a few ideas into a somewhat publishable format.  Really, you don't want to try to read my notes.

Back to Mr. Matt Jackson's contributions to the map ecosystem, his "Barrowmound 10." Per his notes, the tomb side resulted in a case of mummy rot in his home game...  My victims, er, adventures, will be sent to make sure that the tomb is undisturbed, but find something else disturbing in a pair of recently-dug caverns...

Have a look. and find out what lurks in Uthur's Tomb.
Posted by Vance A at 07:54 No comments:

Two posts in a day?  What sorcery is this?

Well I have a few things in the pipeline, and its time to translate my scribbled notes to legible text, followed by making that text somewhat coherent.

So today we visit the lovely Sapphire Vault of Mr. Logos, as he described it, "... the Sapphire Vault appears to have been part of some larger structure at one point – the construction of which is significantly beyond the skills of the current inhabitants. Access to the vault is via one of two small caves on the cliff-face – the smaller cave being about 12 feet above the larger and used primarily as a look-out for invaders, looters, and adventurers."  I upgraded his foul goblinoids to degraded lizardfolk and went from there...

So here's the thing.  Cleric is my favorite old school class to play.  I like the combination of support spells/miracles, plus being able to thwack things now and then. And occasionally hamming it up like some travelling preacher.

But then Dan Collins goes and talks about how and why he's eliminated clerics from his house rules.

HERETIC! (goes looking for firewood and an appropriate burning stake...)

Ok, with that out of the way...  I'm actually treading into game design theory here...  careful now....

So yeah.  No clerics.  Per Dan, if the original inspirational literature - Leiber, Tolkien, Vance, etc. - is devoid of the miraculous healer or armored priest. Using our bog-standard faux European medieval trope, that role is shoehorned in from the Christian clergy and mythology, with a bit of Crusader thrown in.  So the cleric is anachronistic with respect to the source material. Depending on the campaign/world-building environment that a group's game explores, there may not be a place for a cleric in a classic fighter/thief/mage trope.

Soooo... reflecting on that and Tim Kask's commentary  - Hit points were not designed or intended as  strictly physical damage, but an ambiguous combination of physical damage, skill, luck, and fatigue that can compound prior to receiving a potentially fatal blow.

The sparring match referenced by Tim:


Other good examples:  Gotta have some classic Flynn and Rathbone - chewing scenery, taking falls, dodging, wearing one another down...


Or Rob Roy, with superficial damage and exhaustion stacking up prior to Rob Roy getting that critical with only a few HP left?


Therefore, it seems that the cleric's cure light wounds, etc. is inconsistent with the original concept of hit points, since HP aren't directly coupled to physical damage.  Also, if hit points are a combination of the above listed conditions, does it make sense that a PC would only recover, at most, a few hit points with a night's rest?

So then, what do we do without a 'healer' in the party?  How do we figuratively catch our breaths and regain some of those nebulous hit points?

Treading into potentially heretical OSR territory, let's look at 5e for another pair of mechanics, the short and long rests:

A short rest is a period of downtime, at least 1 hour long, during which a character does nothing more strenuous than eating, drinking, reading, and tending to wounds.

A long rest is a period of extended downtime, at least 8 hours long, during which a character sleeps or performs light activity: reading, talking, eating, or standing watch for no more than 2 hours. If the rest is interrupted by a period of strenuous activity—at least 1 hour of walking, fighting, casting Spells, or similar Adventuring activity—the characters must begin the rest again to gain any benefit from it.

A character can’t benefit from more than one long rest in a 24-hour period, and a character must have at least 1 hit point at the start of the rest to gain its benefits.

So here goes something totally untested and unproven.  No warranty stated or implied:

OSR Short Rest: Regain one hit point per level (+CON bonus) up to max HP. Mages may attempt to regain spent spells (only ones previously memorized that day) using a successful saving throw vs spells per attempted spell recovered (shoehorning in a bit of an opportunity to help the mages, particularly low level, to be less of a one-hit wonder).

OSR Long Rest Idea 1: Roll one HD per level (+CON bonus) (up to max HP). Spell selection/memorization as per normal.

Even with a long rest, and excepting the use of healing potions or some other mechanic, there should still be the potential for hit point attrition as the adventure continues - fatigue, healing wounds, poor food, etc. add up.

After all, an adventure is analogous to an expedition, and these guys are shedding hit points like nobody's business... 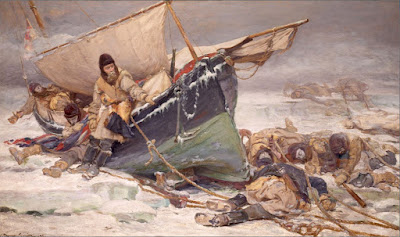 Pardon this ramble - written up Saturday morning after one cup of coffee and a night of ruminating on the above commentaries.  Let me know what you think - is this a workable option for a world without clerics?

Well, maybe there is one classic literature (er, film) 'Cleric' - but he wasn't much of a healer....


And the classic One Hit Point left: