Oop, been awhile.  Away from keyboard, I suppose. Between work, the fact that my gym re-opened, and that it's time to go outside for adventuring...

Anyway, I have a folder full of maps that are in need of tales told, and I found one from a couple years back produced by Kristian Richards.  He produces a goodly amount of VTT content and printable 3d terrain for gaming locations and material, and is definitely worth a look.

Kristian interpreted the map on his own as Thorfinn's Tomb, a one-shot pamphlet dungeon. 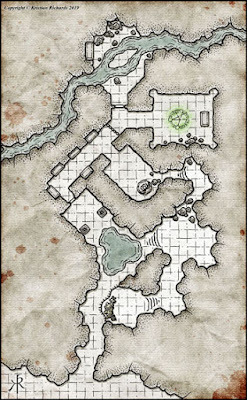 And here is my take on the space, a secluded shrine and tomb that currently has some unwanted visitors. I've borrowed liberally from Gavin Norman's Theorems and Thaumaturgy, a fine collection of three somewhat unpleasant arcane magic user subclasses and spells, with a few OSE and 1e bits and bobs attached.

Well, I should probably post this and get to doing some 'real' work on this warm Friday (predicted >100 this weekend and Monday locally). I have plenty more maps and notes that I want to get down on paper (er, computer) and hopefully share with the world.