I originally found Uri Kurlianchik through his DND Kids blog, where I enjoyed his observations and tales of running games/herding adolescents.  So when his announcement of a new book came across my MeWe feed, I couldn't pass it up.  Besides, I had a long plane ride coming up, and paper-based reading fare is my favored travel entertainment.

So here's a synopsis and review: 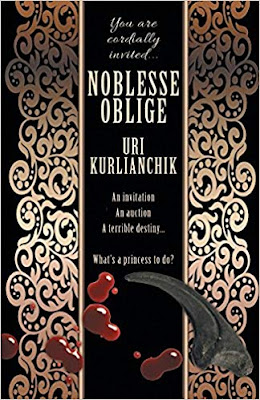 There's no one to rescue the Princess.

Our adventure takes place in a decadent outpost at the edge of the solar system near the border with the insanity-laced Oort cloud and its threatening, alien occupants (the appropriately-termed horror vacui). The unnamed Princess arrives at the asteroid outpost-mansion of an eccentric outlaw and immediately finds herself to be the center of attention, but not in a way that she is used to, or even remotely comfortable with.... For she is to be auctioned off to the highest bidder among a group of equally eccentric and murderous characters.

So marooned with this rogues gallery, with only a ferret (that turns out to be much more than an emotional support animal) and a rapidly-depleting personal micro-armory, she seeks resources and unreliable allies in her attempts to equal the manipulations and machinations of her 'suitors.'

As her 'suitors' get eliminated, leaving increasingly dangerous and deceitful foes, our Princess resorts to greater subterfuge and methodologies as the stakes rise. Will she triumph?
The book is a fun romp in a dystopian future ruled by capitalist-monarchies. Each chapter is headed by an appropriate Dune-like quote with responses/commentary by the characters. Interspersed flashback chapters have vignettes of the various protagonists, linking them, and creating backstory. The Princess is no Mary Sue, the situation remains tenuous throughout.  But she rises to the occasion from a sheltered young woman to a formidable opponent through her own keen observations, recollections of near-forgotten lessons from family and advisors, and resourcefulness. For those of us who enjoy our futures slightly dark and cynical, with a haughty heroine who can't even believe that she's having to put up with these indignities, grab a copy.