Blame Jackson for posting a quick map of a small tomb on Easter. That's my story, and I'm sticking with it. 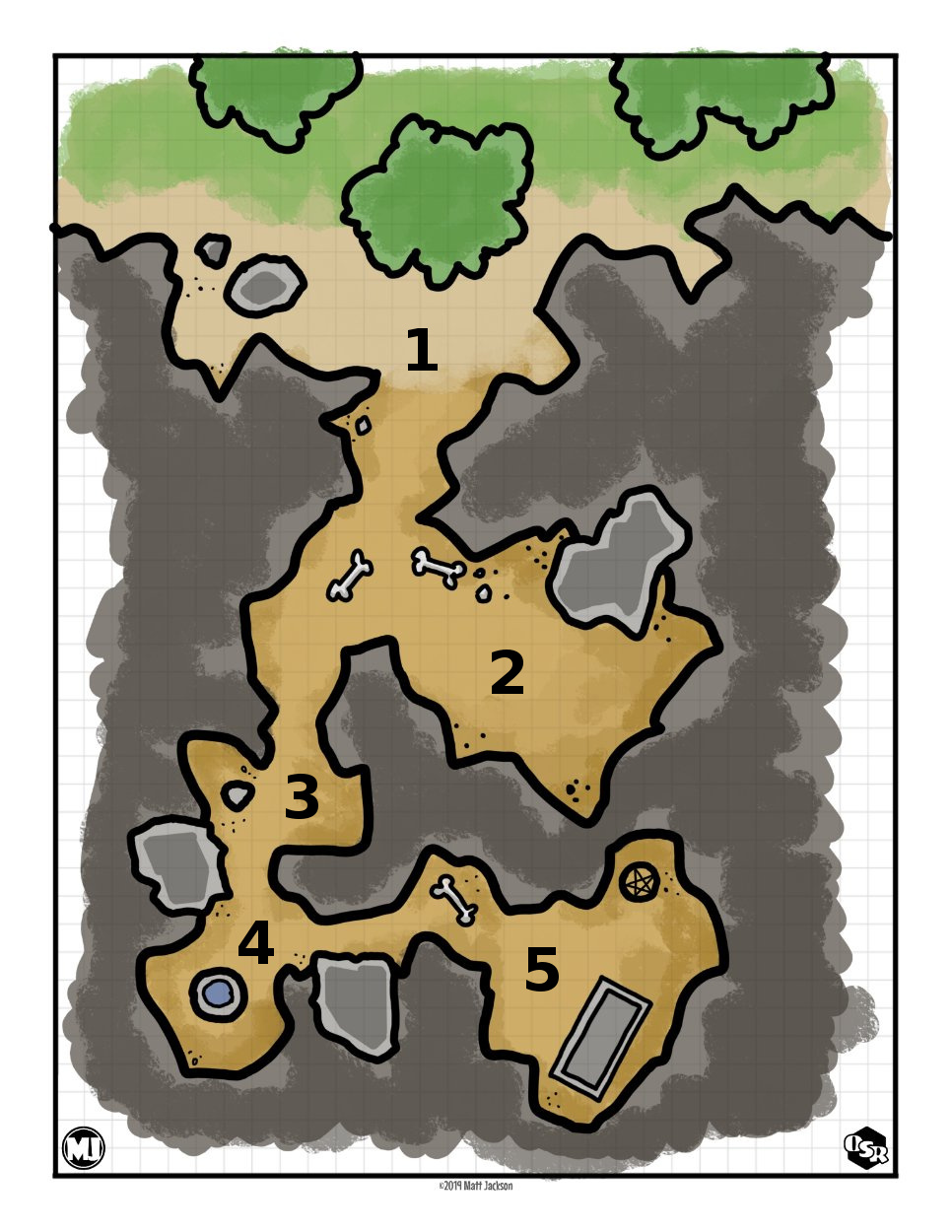 A heretic was recently executed, their body placed within a tomb outside of town. As insurance against their meddlesome followers, the tomb entrance was barricaded and manned with guards to warn the curious away. This morning, the guards' replacements found the barricades dropped and the guards missing.

1. Tomb Entrance - Barricades placed across the opening have been removed/displaced. A smell of death, greater than what would be expected, permeates the area.

2. Signs of Death - Scattered bones are strewn on the floor. Remnants of armor and weaponry indicate that these were once the tomb guards, left to keep watch over the barrow. Secreted away under a boulder emerging from the north wall is an urn containing 190 gp and a few ambers (9, 10, and 20 gp).

3. Ghoul! - A ghoul has found its way into the tomb, and has been picking clean the bones of the dead guards. It will attack anyone investigating the tomb.

4. Pool! - A seep has created a pool in the center of the room. The water has absorbed some divine characteristics, and is the equivalent of holy water. It will cause damage (1d8) to the undead in Area 5. Drowning the being will prevent its regeneration. Remains of another unfortunate tomb guard are in the corridor to the tomb (+1 hammer, purse with 41 gp).

5. Heretic’s Tomb - The tomb houses a stone sarcophagus containing the restless remains of the martyred prophet - an undead still containing a ‘spark’ of life - unfamiliar necromantic energies have imbued the corpse with regenerative abilities, and it becomes "less dead" with each passing day.

Revenant: 5 HD; AC 4/15; Atk touch (1d6+ level drain); Effects: Undead resistances, may cast charm and fear once per day, level drain. Holy water, magic or magic weapons are required to hit and damage. Regenerates 1HP/round during combat. The 'Revenant' becomes more resistant to turning each day by 25%. Roll 1d3 for days "dead." After 4 or more days, the being is immune to cleric turning abilities.

The alter at the north side of the room is that of a protective god, placed as a ward against potential reanimations. The alter grants resistance against the Revenant's spell and level drain attacks to anyone within 5 feet.
Downloadable version here
Posted by Vance A at 12:47 2 comments:

Just attended A Midsummer's Night Dream ballet with the kidlet, had been a few years since I'd seen the performance.  As always, a visual and dance spectacle...

I had forgotten details of some of the scenes and set, and was quietly amused at some surprised audience gasps as a set piece representing a dew-covered spiderweb descended on-stage - complete with a spider that dwarfed the dancers (4HD, I estimated....).

Midway through the first act is a solo dance by Hippolyta, Queen of the Amazons.  In this production, she is accompanied by six 'hounds', who circle the stage around her, as if flushing prey.

There is a mere glimpse of the hounds at about 1:40:


Again, noticing details - the dancers ran with their arms stretched before them, the nearly-white dog-heads (below) contrasting with form-fitted reddish 'coats'...

And all I could think was Undead....

Undead hunting dogs bearing the souls of poachers, those who wasted their kills, and those who trespassed in the sacred groves. Captured and cursed by a goddess of the hunt, they live their afterlife in the bodies of decayed hunting hounds...

Bony skulls and bodies flayed of skin, baying in pain and anger, they pursue their own ghostly hunts or trespassers into the groves, as well as seek those next accursed souls.

Back to a couple of quick scenes/bits of adventure for some purpose...

Mad March Map 28 - "Spire"
Lazlo Nabitovy lives on top of a truncated Methuselah-tree deep within the Liviy Woods. The tree, sheared off by some cataclysmic storm a generation gone, forms the foundation for his dwelling above the treetops. A sage, he has stylized himself as a tower hermit/stylite. Or at least that's what the rumors say.

Nabitovy does generally live a hermit's lifestyle.  From his aerie, he barters with the bird-folk for supplies and news.

But anyone who makes the arduous climb to the top of the tree will find not a hermit's shanty, but a well-appointed manor. Filled with empty rooms, Lazlo mostly knocks around on his own with but a simpering birdfolk servant named Kiawk.

He will gladly entertain visitors and supplicant's for his knowledge and interpretation of signs.  Better yet, if they have brought spices or other rare ingredients, he is quite the epicurean...
Posted by Vance A at 19:06 2 comments:

It's the season for the 11th edition of the One Page Dungeon contest (https://www.dungeoncontest.com/) where brevity is the soul of wit - and adventure.

And it's time for Max and I to drop one more annual entry...

A bit of timey-wimey funny business, this go-around....

Much thanks to Matt Jackson for lending me his "two" towers.
Posted by Vance A at 12:59 No comments:

So I guess I'd never noticed the 'thoul' listing in the B/X monsters. Chalk that up to incomplete reading comprehension, or something. And, I don't think I've seen them employed in the adventures I've perused.  So, time to drop them as backup dancers in another B/X song and dance, this one taking place in caverns accessed via a tidal marsh, where someone is up to nefarious deeds.

Again, thanks to Matt Jackson for his mapping, and to Gavin Norman for the B/X Essentials booklets, where I finally took the time to read the monsters from A to Z....

And another guest appearance by my wife's artistry)

EDIT: Download link updated to PWYW on DrivethruRPG
Posted by Vance A at 20:58 No comments:

So, when Matt Jackson posted up 'Barrowmound #11'  on his Patreon, I commented, "Cool, looks like a mini Quesquaton. Now, where to put the room of pools...."

And that's how I committed myself (at least in my mind) to statting up this maze... The occupants of Quesquaton were Rogahn and Zelligar, a fighter and mage, respectively.  Considering this, the occupants of this maze must be the other two base B/X human classes - a cleric and thief...

With that meager concept, I was off...

So we have a cleric and thief who found themselves allied in adventures, found their own subterranean outpost, and created a space that reflects their two characters' personalities. While it isn't as extensive as B1, I hope that it has a similar flavor. The challenges and exploration, like B1, are put together with low-level mooks in mind. I even included a handful of B1-styled pregens in the back, complete with appropriately wacky names.

No room of pools though. Sorry about that...
Many thanks to Matt for the original map, converting me to the zine format, and several days of editing back and forth in Google Docs. And to my wife for drawing up a few creepy goblins :) Thanks also to Gavin Norman, for his B/X Essentials and general blessing of this crapshoot. 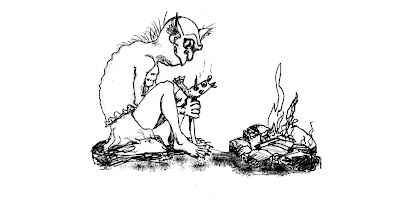 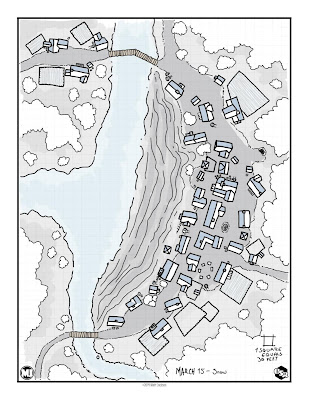 There has been another hard freeze, with the river gone solid. The residents look at the ice and quietly discuss the likelihood of having to replace one or both of the town's bridges after the spring thaw. Again.

It is far into the winter, the third rough winter in four years. It is to the point in the season where concerned eyes look at the near-empty larders, and the wives are counting out the remaining potatoes and roots.

There is nothing to spare for rough adventurers traveling through. They had better have their own meager rations, as few will take up an offer to share their stores. After all, one can not eat gold.  Unless they can perhaps take care of some nuisance or raider: the frozen walking dead, a werewolf stalking the woods, or equally desperate bandits raiding the stores.

People stay in but for necessary forage for thin livestock, breaking the ice for the well, occasionally carrying out an individual not hearty enough to last the winter...

The snow hasn't fallen for weeks, it is too cold, with a bone-breaking ache.

"Are you going somewhere warmer, guv'ner?" As the party leaves from their hard lodgings, they find themselves tailed by a sallow youth, with rag-wrapped feet, and a few precious potatoes and crusts of acorn-flour bread in a sack.
Posted by Vance A at 21:23 No comments: