It's been a few months since I contributed to the RPG Blog Carnival, so here I am...

Kobold Press is hosting this month's RPG Blog Carnival, entry, themed 'Magic', with open-ended options on where to explore with the topic.

Sooo...  I think I'll noodle around on the topic with respect to another event this month, the August 21 total solar eclipse... 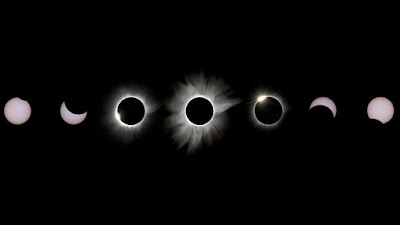 Although a lot of the online references/resources talk on the magical elements of eclipses with respect to the wiccan/pagan tradition, I'll leave Timothy Brannan to discourse on that...

However, taking a few of the traditional superstitions and themes of the eclipse...  An eclipse is: 1) a focal event, 2) a symbol of compressed time (a day in minutes), 3) an event of reformation/rebirth, and 4) a moment of the Moon suppressing the sun, and

I'm not providing many specific mechanics/spells/items, but more of a meditation on the themes and hopefully some seed ideas...

Focal Event:  The conjunction of the lunar and solar powers loosen the gateways and wards between planes of existence, and of the elements.

Compressed Time:  A day is compressed into mere minutes, and those attuned will take advantage of the event as a catalyst.
Reformation/rebirth: As the walls between the planes are thinned, the eclipse may offer a multitude of opportunities for reformative events.
"Moon Power":  Like any celestial event, not all is positive energy.  The Night temporarily overcomes the Day for the briefest of moments, allowing dark forces a momentary advantage and freedom... 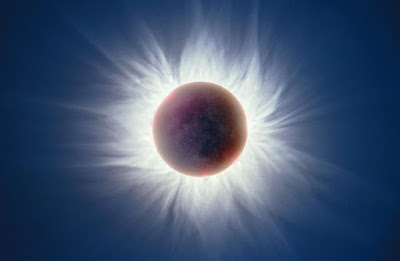 Bonus:
Here’s what you’ll see where you live.

Tomb of the Warrior King (a one-hour map and adventure...)

So I had to send some documents to my stepdaughter back east, and y'know, that envelope felt sadly thin.  So, knowing that she and her boyfriend enjoy various tabletop games (and she's gamed with me in the distant past), I stuffed the envelope with a copy of SWL, a few blank character sheets and a quick and dirty hand-written map and adventure...

Here it is, very slightly cleaned up and edited.  Still quick and dirty, with a somewhat uninspired title, but hopefully a passable low-level or introductory adventure, with a small puzzle, a bit of treasure and a couple of magical treats and threats...