Mini-Review: Ibn Fadlan and the Land of Darkness

Time for a brief look at a time and place in history that passes under the radar in too many history classes (Really, does anyone learn anything in a history class, particularly high school?).  That is - parts of the world that are not Western Europe at some time between the end of the Roman Empire and perhaps the Renaissance.

Anyway, I believe that this particular book came onto my radar via +Matt Jackson in some post or discussion regarding Viking history and influences.


Good read - it is primarily excerpts/fragments from Ibn Fadlan's travels, as well as many other Muslim authors in the 900's thru 1100's.  The authors/documentarians are traders and missionaries, intent on building relationships through both commerce and conversion. And gaining intelligence on these mysterious, intimidating folks from the north lands that spend half the year swathed in dark and cold.  The authors who traveled north during the cold months write of their hardships in great detail - voluminous furs and clothing, frozen rivers, difficult transportation, short days.

While the book is best(?) known for Ibn Fadlan's very detailed description of an authentic Viking ship-burial, the passages also document early conversion of Turkic tribal leaders to Islam, Jewish trade networks extending to China and the Asian subcontinent, even an early description of the Polish city of Krakow. Speak of interactions and vibrant trade between cultures and religious groups: Muslim, Jewish, Christian, 'pagan' faiths. It's a good document regarding interaction with the Rus (Swedish Vikings who settled Russia, became traders, and gave the country its name), as well as a glimpse into the travel and trade of west Asia, Asia Minor, and Eastern Europe pre-Crusades.

Like many similar texts, the collection is a mix of observation and myth/hearsay.  The writers provide detail of the peoples who they interact with, and speak of both commercial enterprises and the commodities of areas, as well as describing mythical locales and people as Alexander's Wall and the tribes of Gog and Magog. 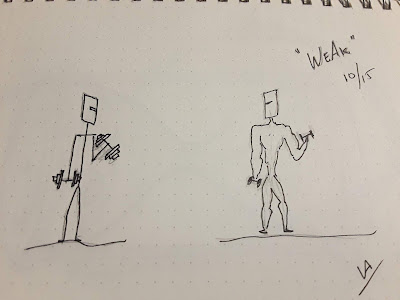 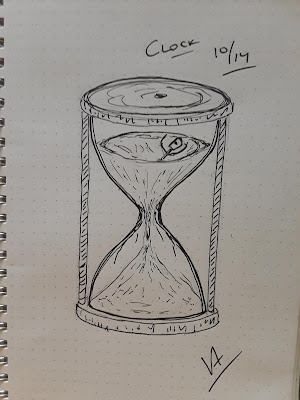 OSR Guide For The Perplexed Questionnaire - My $0.02


OK, my take on the OSR Guide For The Perplexed Questionnaire.  Since all the cool kids are doing it.  Trying to come up with some personal favorites, a few points not already mentioned, and some general relevant irreverence...


1. One article or blog entry that exemplifies the best of the Old School Renaissance for me:

All Hail Max.  Re-reading it still warms this stony heart.  We all need to be more child-like.

2. My favorite piece of OSR wisdom/advice/snark:

Although Courtney Campbell's Hack&Slash Compendiums are dense with game theory, content, and advice. Let's go with that.

Midderlands is green and dark and beautiful.
Slumbering Ursine Dunes.  Because Warbears.

4. My favorite house rule (by someone else):

I suppose the simplest explanation is from my inaugural blog entry in 2014:


"About a year ago, I wandered back into a game store, after a brief (30-year) hiatus from RPGs.  I came out with a Pathfinder Beginner Box, tore it apart, and said, "Hmm, this is what gaming is now..."

About that time, a friend mentioned that they still played 1st-gen D&D, and I found the thing that is the OSR.  So I've been reading the blogs of the community, studying, and filling a couple of notebooks with a few of my own crackpot ideas. "

Not exclusively OSR, but https://donjon.bin.sh/
Random inns, pickpocket loot, treasure, and demographics, among other goodies.

7. Best place to talk to other OSR gamers:

G+, for the time being.  I'll probably eventually walk my luddite ass over to MeWe...

8. Other places I might be found hanging out talking games:

Just this blog, I suppose.  I'm not much of one for forums or chat apps.

Or just mentioning gaming in passing to a coworker, friend, climbing partner, random person at bar.  And being surprised at the number of folks who say, "Yeah, I played..."

Ok, here goes.  The newer editions focus on 'heroic' play.  PCs are upgunned from the start.

OSR PCs are average Joes/Janes, occasionally a bit above average.  But even a high level PC can still be nearly one-shotted in the right situation.  You aren't 'heroes.'  So you play cautious, creative, sneaky, figure out how to get around in a scary world.  What's the phrase - 'You are not your character sheet'?

One of the great tenets of fiction is taking an ordinary character, putting them into an extraordinary situation, and seeing what happens.

The low entry fee - ha.  There is so much free or reasonably priced content out there, particularly rulesets.  One doesn't need to drop $50-100 in rulebooks, just to find out that they don't like the system...  Everyone can take a look, mix and match, homebrew.  This has led to a vigorous DIY ethic, with increased production volume and quality in the few years that I've been aware of the movement.

12. Two other cool OSR things you should know about that I haven’t named yet:

Matt Finch's Jordoba campaign.  Two groups, one OD&D, one 5e, exploring and affecting the same world (I include the 5e group because chargen was 3d6, in order.  And because the 5e group has had more character deaths than the OD&D group... [See #9]). And pack-centipedes.

The indomitable Jeff Rients' Miscellaneum of Cinder.  Especially since it includes his carousing house-rules, and 'What are the Goblins Up To?'.

13. If I could read but one other RPG blog but my own it would be:

http://elfmaidsandoctopi.blogspot.com/ Not sure now Chris can consistently come up with his gonzo d100 lists, but I want some of it, whatever it is...

And I wish Jim Garrison was still posting his Bujilli campaign, but he's gone dark ...

Getting to take part in various crowdsource projects - Expanded Petty Gods, Tenkar's Island, From the Vats, a few random hexcrawls and other prompts on G+, etc.

In-blog, I suppose my '4 scenarios' writing exercises, with four separate adventures built off a single map. Although people seemed to quite like my Technoviking.

Taking part in a monthly B/X game, but need to roll more!  Had an inordinate amount of fun in a couple of con drop-in 5e games, so open to going down that dark path, as well...

And I need to get past social anxiety and just say, "Hey, I'm running a game. Wanna play?"

16. I don't care whether you use ascending or descending AC because:

I'm bi-AC-ual.  I write most of my game content stuff for S&W, and Delta's Target 20 math works.

17. The OSRest picture I could post on short notice:

Just do an image search for Henry Justice Ford: 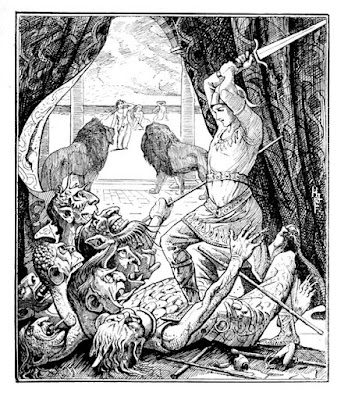 I'm not doing well with keeping up this year...  Another barrage of poorly-executed sketches.... 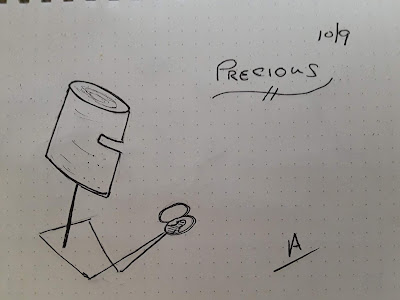 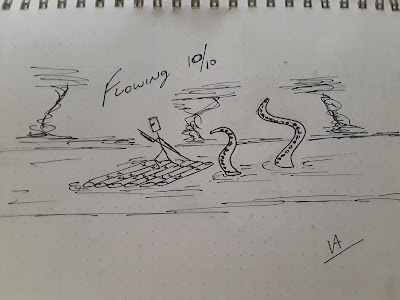 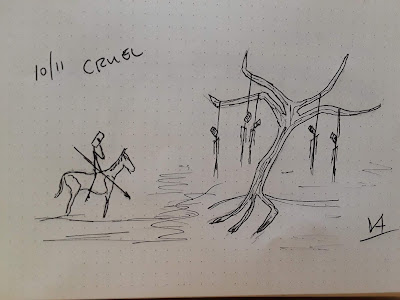 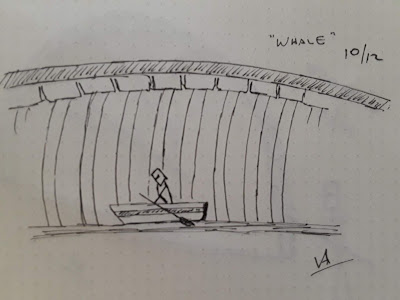 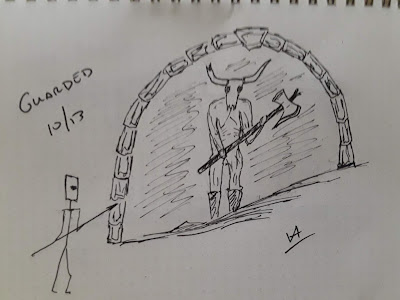 Only one day behind... 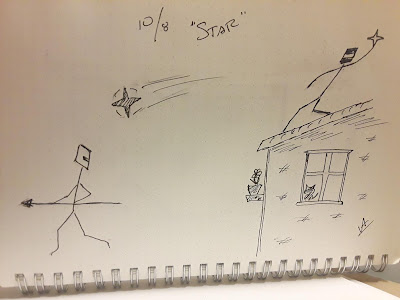 Some quick make-up sketches to get back on track.  More misadventures of the anonymous man-at-arms.... 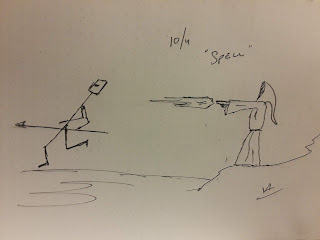 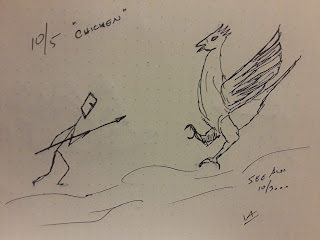 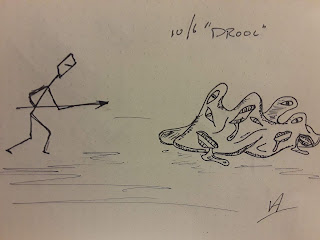 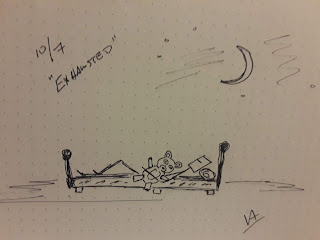 Exhausted
Posted by Vance A at 20:17 No comments:

I really need to keep up on my writing projects.  This one languished way too long as a random list of scribbled notes, then various drafts on the drive.

Anyway, here's an arcanist who works and plays in the world of sleep, along with a short selection of spells particular to the subclass...

"An arcane student of sleep- and dream-manipulation, the Oneiromancer dwells in the unreality of the unconscious, effecting dream manipulation, recuperative spells, augury and the potential manipulation of outcomes..." 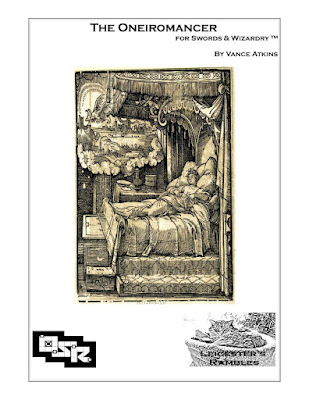 Posted up for free/PWYW on RPGNow for your review.  Enjoy! 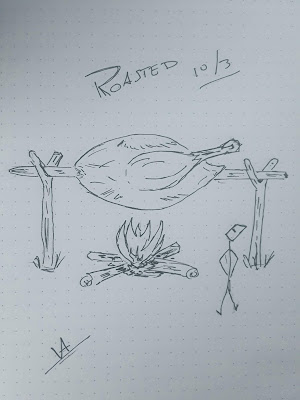 Ok, saw the Inktober prompts, so will give it a go again this year.

Catching up with a couple quick sketches featuring the nameless man-at-arms who starred in several of last year's pieces. 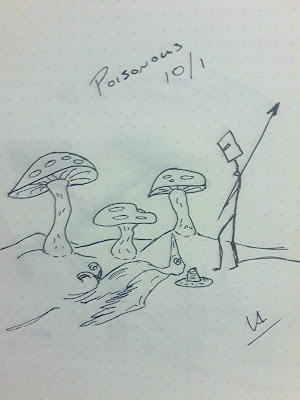