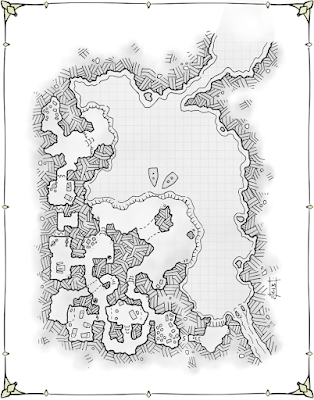 Time to return to a Jackson Map for a bit of a seagoing adventure. This map was languishing in my 'project' file for quite some time until I had the correct inspiration to pull it out and populate the space.

So yes, another great space, where I was just having a challenge getting that first idea down on paper. A pirates' den was a good starting point, and, like many maps, there were just enough features depicted to help direct creating themes and filling the spaces with encounters, interesting items, and history.

After getting the rooms roughed out, my primary challenge was getting the boats/ships in and out of that narrow passageway. Which after some thought (and recollection of multiple literature courses), was aided by a magic item inspired by the Odyssey's bag of winds. And there are a couple of low-powered or curiosity magic items, as well...

Of course, rooting out pirates may create a number of options for seeds:

The treasure may seem a bit light for a "Type A" hoard for a pirate crew. But don't forget to add one or two small ships to the total haul... (if the PCs do crime in the correct ways).

So, I've had notes for the concept and stocking of Dyson's Blind Lamia's Cave in my WIP file for a bit...

I was slowly adding a room descriptor or note, when, dammit, Dan and Paul used the same map for their latest "Dungeon Design Dash" one-hour dungeon stocking exercise...
They chose to use a random dungeon name generated from one of the myriad tables from the Tome of Adventure Design as inspiration for their environment and foes. (By the way, for folks interested in a fresh copy of that most excellent resource, author Matt Finch is gearing up for a Kickstarter of a revised and expanded version.)
So I'd better post up my interpretation of the map, in turn...
I chose to take my cue from the original map title. Who is this lamia, why is she blind, and why are there so many statues in this cave?
I'd originally pulled this map from Dyson's commercial map files as a contender for use in a contest or similar project, but had let it go fallow after selecting another map for the purpose. I liked the naturalistic, eroded characteristic of the map, and it felt like it created a space to tell a bit of a story. And like many adventures, the titular character is no longer present in a living form, but her memory has been honored by followers, leaving potential boons and banes behind for the curious. Liberal use of illusionist spells or effects are present to create both atmosphere and hazards.
Posted by Vance A at 12:16 2 comments:

As I mentioned before, to my pleasant surprise, my entry made a good showing in JB's Year of the Rat contest, and he was kind enough to gift me a copy of his latest publication, Comes Chaos, as a prize (I already have his prior two publications, the Complete B/X Adventurer, and the B/X Companion). 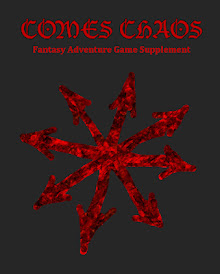 Per his ad copy:

COMES CHAOS is a campaign setting designed for use with the B/X fantasy adventure game (and compatible retro-clones). It contains the information needed to transform your home campaign into a chaotic hellscape populated with mutants and demons, dark sorcery and depraved cultists.
The book contains new ways to use old character classes. It contains dozens of spells of dark sorcery. More than 100 mutations and "gifts" of the dark powers. New combat options. Scores of monstrous foes and demons. More than 50 unholy magic items. Rules for creating chaotic wastelands, rules for corrupting player characters, rules for demons and cultists and for running a setting of ever encroaching chaos and the heroes that struggle against its rising tide. Information on running a villainous campaign for aspiring champions of evil, as well as guidelines for redeeming those who fall to darkness.
A 64 page book, illustrated by Kelvin Green. Whether you're looking for a unifying theme for your fantasy adventure game, or simply want to spice up your campaign with demonic possession and vile enchantments, COMES CHAOS has plenty of demented ideas for your enjoyment.

Confronting chaos is a dangerous affair. Even the most devout or righteous characters may be twisted and corrupted by exposure to these dark forces and dark gods. Sometimes, these individuals are even more easily brought down and under the sway of chaos.
Comes Chaos provides a number of resources for campaigns at the edge of blighted lands, where heroes (or antiheroes) probe past the borders and attempt to investigate or push back Chaos. In spite of PCs' best intentions, each exposure increases the chance that they will take on corruptions and mutations, and/or will gain the attention of some chaos champion, or even a more powerful being. And, with each exposure comes the growing allure of joining Chaos and the 'rewards' it offers...
Read more »
Posted by Vance A at 10:49 No comments: