In spite of having to overcome insurmountable obstacles between me and my drawing tools... 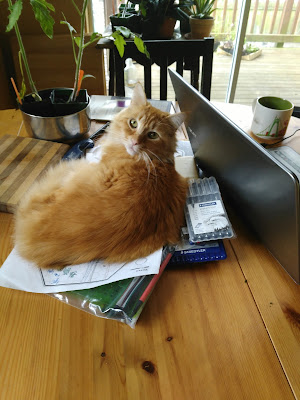 and simultaneously writing three competing dungeons over the last couple of weeks (leading me to put up a poll on G+ to help in my selection process), I sent in my One Page Dungeon entry this afternoon.

Donjon's Random Pickpocket Loot generator (among others) will occasionally spit out, among the small coins, sets of false teeth, and "blob of iron" is the "Deed to a ruined tower." I always thought it was a bit of an evocative device, ripe for a side adventure, or for use as a base for clearing an area and carving out one's own place in the world.

So I wrote one up this year. Come on down and meet the neighbors.

I'll post the runners-up over the next couple of days.


Victims of sacrifice, the condemned, the shunned... many of these souls were fated to end their days immersed in the ooze at the bottom of a bog, their remains interred into the mud.  As more doomed souls join these increasingly restless dead, the bogs preserve and give un-life to these corpses.

Given time, the bogs accrue the negative and tragic energies of these dead, transferring these energies to those sunk into their muck and ooze.  And eventually, a tipping point is reached, and the bog mummies may arise to stalk from the muck in search of some retribution.

Bog mummies are characterized by their tough, leathery flesh, well-preserved in the anaerobic and acidic environment of the bog bottoms.  The mummies will be tannin-stained to a dark red-brown.  Many will bear evidence of their means of death or maltreatment and torture prior to death - nooses, manacles, lacerated flesh. Well preserved, the bodies may appear fresh-dead, but for these ghastly features.

An individual mummy, upon arising, will have a target of its revenge - typically the source of its misery and death, whether it is a magistrate, shaman-priest, or members of the lynch mob.  For those who have been interred long enough, their original tormentors may too have crossed the veil.  For these, they will seek a member of the same class, or perhaps a descendant of their original killers.  The mummies will resolutely seek out their condemners, and are a bane in areas where sacrifice and justice are meted out in the bogs.

Sunk into the anaerobic, acidic environment of the bog, the body is preserved, and the tragic energies distill the hate and pain of the victim's death.  The skin is toughened, yet still pliable.  In addition to clubbing or clawing damage, the touch of the bog mummy causes acid damage, corroding armor, degrading clothing, and dissolving flesh.

No Encountered: 1d3
HD: 6
AC: 4/16
Attack/Damage: 1d8+Acid Touch (1d6 1st round, save or addtl 1d6), +2 to hit vs 'favored' opponent
Save: as Cl5 or equivalent
Move: 6
Special: Hit only by magic weapons.  Individual mummies will pursue either individuals or equivalent classes of their original condemnation and death and receive a bonus in attacks against them.
Posted by Vance A at 17:46 2 comments: