Not too long ago, I watched Daniel of Bandit's Keep roll up a random dungeon to illustrate the process.  I, too, am a proponent of the Moldvay 2d6 method, so this wasn't a new approach, but it's always good to see how someone else utilized the method. And a follow-up actual play, where he ran his players through the creation, was a fun bookend on the process.

And this morning, I watched Red Dice Diaries quick dungeon generation video, which spurred me to do a bit of quick-and-dirty dungeon populating.

Scrounge a Dyson map of approximately five rooms, and hit a few random generators for aid. Mostly rolled up general room contents by Moldvay 2d6, adjusting as it seemed appropriate. Treasure was rolled via the OSE generators, and occupants, unless noted, are bone-stock OSE. A couple other generators aided in color. 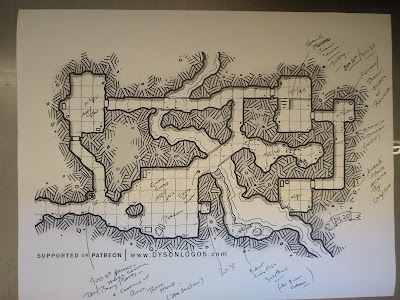 1. A worn statue to Phaarus, god of massacre guards the entrance. The statue is carved of black stone, depicting a tall man with a head covered in bony plates, and wearing garments made of the bones of the dead.

2. The room was once a meeting hall, but has long been stripped of anything of value. Faded and damaged frescoes show scenes of the god lording over the deaths of innocents and vanquished soldiers. A few broken crates are scattered about, apparently formerly containing provisions or trade goods. A locked closet is filled with dusty jars. One contains 200sp and a potion of levitation. Running water can be heard down the corridor to the northeast.

3. A rough alcove on the west wall hold an alter to the worship of Phaarus. Four gnolls crouch here, snickering in their rough language, while offering up a number of severed hands as tribute. A shallow alcove at the north end of the room shows evidence of a removed statue or figure.

4. Rough stone steps lead to the bank of a subterranean river. Claw marks are visible in the sand. There is a 2 in 6 chance that anyone investigating the river will attract the attention of a giant crayfish (as giant crab). It will surprise intruders to its territory on a 3 in 6.

5. A rough cavern has been hollowed out by some burrowing creature, now absent. A pile of bones, chitin, and nesting material fills the eastern end of the borrow.

6. A two-level room contains a monolith depicting Phaarus. The monolith is on an unstable footing, with a 2 in 6 chance to topple on someone investigating it (2d4 damage, requires 25 combined strength to lift from a trapped victim). Beneath the monolith is a coffer containing 100sp and 300gp.

7. A former small shrine is empty but for three broken columns.

8. The chamber's southwest corner has been eroded away, falling into the river. The room contains some broken furniture. It is occupied by a gnoll shaman, Drogakk Barkclaw (as gnoll except: 4HD, spells: magic missile, protection from good, hold person) and his two gnoll guards. If the PCs encountered the giant crayfish (Area 4), the shaman will be warned of their intrusion. The shaman carries a pouch containing three gems of 100, 500, and 1,000gp value.

Ok, maybe closer to two hours, but I stopped and had a snack.

One Page Dungeon Contest time again, and my brain was empty. I've entered consistently since 2013, and having a deadline always helps creativity.

(Shuffles around in his collection of downloaded maps)...

Well, I had a space to work with, and a title. And somehow, in my notes, there needed to be the potential for encountering drug-addled unicorn-folk revelers. That's what random tables are for.

A compact 'adventure' area with a built-in mini-game in the vein of the classic "case the joint and dlo a heist." Bribe folks, buy information, figure out how to get the McGuffin and get out, and maybe clear a bit of extra cash for yourself. Who knows?

Here ya go: Have A Cigar

I recently watched Daniel Norton's discussion on alternatives to death at 0 hit points. While most games I've played in tend towards expiration at 0 hp, I have played in a game using Cavegirl's Horrible Wounds table (My PCs have avoided its effects, but I recall a henchman cleric now has a serious speech impediment from taking a swinging-log trap to the face). Likewise, I've followed the Ten Dead Rats AP and the 'Critical Injuries' table in their house rules has been used with some effect.
So while death is certainly still on the table, it's not a sure thing, nor is it necessarily saved away, as in certain modern editions.
So, an alternative that I'm thought experimenting here... At 0hp, one still dies, but has the chance to go out in a blaze of glory.
In Pathfinder, orcs have 'ferocity,' the ability to make an additional final attack or other action upon being reduced to 0 hp (dying the following round unless healed).
So, give the characters an opportunity to die a cinematic death via one final action upon hitting 0 hp. They still die at 0 hp, but there's that chance to slightly salve to wound of losing a PC by closing out their chapter with something cool.
Now, not ever character gets to take this action. After all, most will still die ignominiously in the dark (shanked by a goblin, melted by slime, bonked by a falling rock trap)...

I've enjoyed the Swords & Wizardry ruleset and books pretty much since I found my way back to gaming and, specifically, into the preserved and remastered rulesets made possible through the OG.  I initially grabbed the free pdf, then picked up hardback rulesets.

I own two versions of the all-in-one hardcover rule sets (Erol Otus cover and Kaos Nest cover). I like the system for its OD&D simplicity and hackability, and a large number of my scribblings have used the system as a base.

So when the Kickstarter for a digest-sized boxed set was announced, I jumped in for the 'wood grain' style box. Because nostalgia of original white box/45th +/- year anniversary (not that I owned the books or played in that milieu - I started with Holmes). I also appreciated the idea of the presentation of the multi-book digest format.

The project funded in March 2020, right about when other newsworthy events were happening. The planned fulfillment was October 2020, with the actual fulfillment occurring in the Spring 2021. Kudos on the team for their periodic updates and not going dark on the supporters during this time. The books and boxes were to be printed and prepped overseas, and delays occurred with production and shipping.

So yes, I was pleased to receive it, even if somewhat delayed.

The product consists of 'wood-grained' box reminiscent of the 1974 box set containing four softcover books: the Player Book, Spells & Magic, Monsters, and Referee's Book. Also included were a thank-you note from Matt Finch, character sheets, a set of dice, and a bookmark. Non-physical rewards included digital copies of the books and other player/GM aids. The reward add-ons included a book of additional monsters, a GM screen, and an intro adventure. The box is large enough to contain all items with room to spare.

So what's my takeaway? Well, it's a good product. But not a great product.