Possum Junction, or Tim drew too much.

Sometimes you get an unexpected gift around Christmastime. Tim prefers to create smaller spaces (five-room dungeons and the like) for his mini-adventures. But apparently he got carried away with this piece, working on technique and experimenting with textures and the like. So sure, I ganked it. 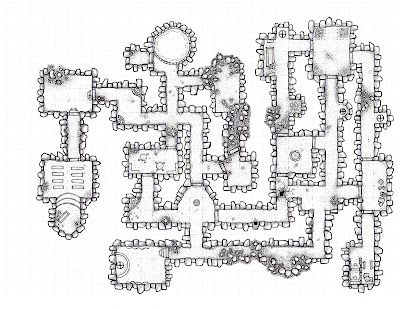 This is a most excellent space, with looping corridors and multiple pathways, as well as a fine smattering of interesting features to tell a story. Hazards are built in, and there are enough room details to fix a number of points of interest and potential encounters.

A few elements stood out: a pool, a few statues, an apparent chapel space, a lot of collapsed corridors, and started filling in the blanks from my end. Helped by a few die rolls, of course.

Like many subterranean spaces (and historical ones), I figured there had been multiple tenants. And each had left their mark. For reasons unknown or partly explained, selected features from prior occupants were left in place. Some out of respect, some due to their inherent hazard. And of course, there are the new squatters here, making a mess of things, perhaps.

And since Tim recently mentioned some content and a contribution to Expanded Petty Gods, I had to pull the tome off my shelf and add a couple of names out of that mighty group project of the G+ days... just for fun.

Statted with OSE, a bit of 1e, and some homebrew...

So let's see who's up to mischief in The Caluromys Chambers.

I did abandon Idea #1: Dwarven Frat House. But there is always time to return to that...

Edit: Updated scenario with specific stats for the water spirit (figured that since I'd written a build-your-own-monster formula, I might as well use it), and made minor language and format edits.

Taking a Rest Stop at Longtooth

Two post in two days? What madness is this?

Well, Shane made up a 'five-minute map' of a wide spot in the road named Longtooth (although "Village" is a bit of an optimistic appellation). 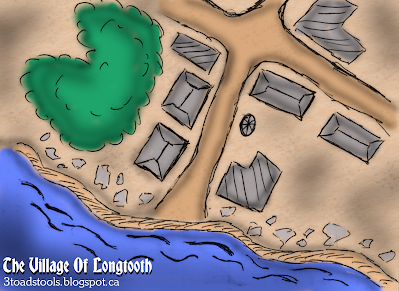 And I figured I could do a five-minute (well, 45-minute) writeup to give a name and purpose for each of the residents.

So here it is.

A one-page village with descriptors of the occupants of each of the seven buildings. No stat blocks, just some quick and dirty whos and whys for some idea seeds. Somewhere for your PCs to take a break along the road, or perhaps they just stepped off the Longtooth ferry from points unknown to find themselves in this dusty huddle of buildings.

Well, last week's foray into Steve's White City of the Death Monkey God saw Shamus get feared out of the room, Vicil reduced to 3hp, and Sumeh avert a hold spell (and pending disaster) by judicious use of longsword. We did get some gems and a human femur with a crystal that seems to act as a detect magic. A qualified success, then. 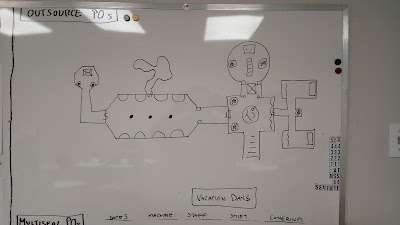 And when people leave maps around, I may pick them up and make an even bigger mess of them.

And I needed a focused writing exercise: About 90 minutes of freewriting produced the first draft, with some half-assed editing and additions this AM. Was good to just walk through the space room by room and say, "OK, what's here and why?" Steve says he's going to kill/run his home group in it. So we'll see how that goes...

As a bonus, the adventure also includes some brief advice for Dungeon Project Managers. You're welcome.

Oh, and Matt prettied up the map.

December? Where'd the year go? Anyway...
Someone on Reddit OSR asked about crafting up a monster if you didn't have access to a bestiary or similar, or perhaps to homebrew up a monster. Of course, there is always the most excellent advice of "Everything is a Bear" 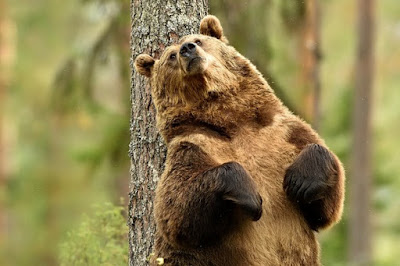