What's in The Tombs, Jackson?

Jackson has been busy cobbling together some excellent maps on 'vintage' notebook paper for folks to keep themselves entertained during our communal isolation.

A few days back he posted this bundle of joy:

"You traveled the gorge, met Tomlin and he mentioned that farther along the gorge there is rumored to be some tombs. So, being of sound mind, you decide to explore further.
He mentions one tomb is rumored to already be open, inside it is haunted but there is some sort of glowing archway that the old timers say used to whisk you away somewhere. Where? He has no idea, perhaps to a secret tombs locked away in the rock?
Another tomb is rumored to be in the same area, one for the three sister of Agmorda who prayed to the toad god Ptturib. It is said, around the drunken tables at The Dead Rabbit, that the tomb is home to a room littered with gold coins. So many that it would take multiple trips to remove them all. Course, the sisters aren't too keen on all their pretty coinage leaving their tomb, but hey, y'all are adventurers, brave and whatnot, right?"


So - the current ongoing environment is wearing on me. Like most of us. Even though I can get out of the house for work, it's still an isolating world, and I just feel unmotivated and dull. So this morning it was time to bear down and create a bit.

Normally when I write, I'll note/outline each room, maybe use Moldvay's 2d6 random stocking method to suggest some fillings, then backfill the room descriptions, contents, and encounters. Today, I wrote from the empty page, starting at "Room 1" and moving in order through the complex. Matt threw enough seeds in there (Three Sisters, possible teleportation, toad god, and room of gold) that I just allowed myself to point and go.

So here it is - writing in a single sitting (more or less), one draft straight through. Written with the assistance of:

Yeah, it's a potential meatgrinder (besides the (SPOILER) literal meatgrinders)... Written primarily with OSE and a few extra bits and bobs. 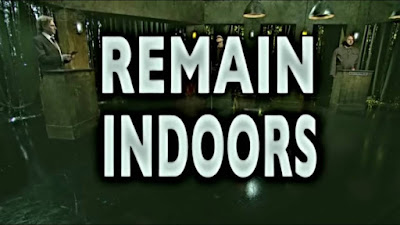 Pyramid of the Restless Eye - A Walthall interpretation

Greetings from CoronaCon2020, Day Whatever.

Doing pretty well here, and hope that you all are safe and sound as well. Trying to keep up fitness, both physical and mental, so regarding the second - a writing exercise for today:

Ganked another of Daniel Walthall's recent maps - an evocative pyramid, and wrote it up as an objective location with a number of undead guardians that will require negotiation (and potentially a quest) rather than combat to gain information or other desires from the target MacGuffin. It's a bit open-ended, and an eccentric undead has their potential, as do the undead's companions, hopefully.

So hack and slash your way through the jungle until you reach the Pyramid of the Restless Eye, and find out what Amenhemti is interesting in adding to his collection in exchange for his services.
Posted by Vance A at 10:51 No comments:

James Young has helped run the Secret Santicore community writing 'gift' project over the last secret years. With the demise of G+, the project was ported over at the OSR Discord Server. And with the current state of the world, James added the Easter equivalent for a bit of creativity and levity - Behold, the Secret Jackalope!

I've played in these projects on and off, so threw my prompt into the list. In return, I received my Secret Jackalope prompt:

The Jackalope is here, and requires a SACRIFICE.

Weird monsters to stalk through some post-apocalyptic ruins in a world with lovecraftian horrors & GLOG sorcerers, or some plot hooks/ a dungeon for investigations within a walled-off city at the edge of the world


And a prompt needs inspiration. Serendipitously, a piece of 'appropriate' art popped across my DeviantArt recommendations:

All things considered equal, this fit. And so did the rest of Ondes7's work, a collection of surreal and adequately creepy pen and ink and graphite pieces that fit the imagery of Lovecraftian horrors... 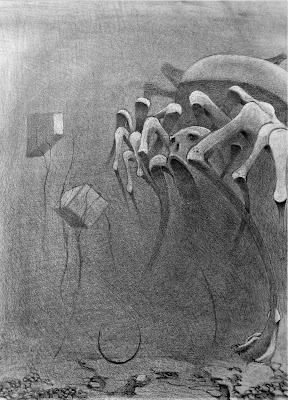 So off to the races with several atmosphere-pieces of creatures that have invaded the world from the Void.

So these monstrosities aren't statted out - more notes, impressions, and perhaps a few strategies that have been found effective to counter them. But hopefully something useful as think-pieces and inspiration for a twisted world.

And I did have to shoehorn some background for the city of Redoubt, and some rumor seeds, as well. Because apparently prompts for last cities is a thing for me... 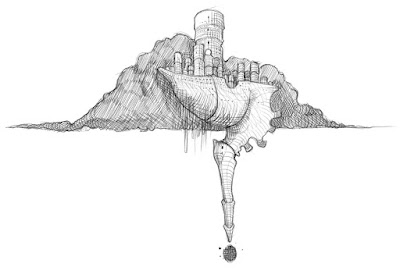 So, thanks to SherlockHole for the prompt, and thanks to Ondes7 for a batch of inspiration.


Welcome to a City on at the edge of a ruined world, and the things that prowl beyond the walls.