Myrma of the Crystalline Eyes.

My stepdaughter has a penchant for slightly surreal sketches. She showed me a few pieces recently.   Flipping through her sketchbook, at first glance, this appeared to be a girl with crystals for eyes.  At second glance, it may be something else, but I'm going with my first impression.

Myrma Fromme, daughter of the wealthy ivory merchant Lorl Fromme, studies with the elementalist Qao Hianwou, who has recently been attempting to create gem-like elemental forms for the amusement and service of the fabulously wealthy.

Myrma, is a studious and well-meaning girl, but not the most observant... She set off an inadvertent chain reaction by tripping over a bucket of crystals and material components for Hianwou's research, igniting an explosion and becoming blinded by the shards....

Qao, crushed with guilt and beholden to the Frommes to care for their daughter, feels obligated to make things right... Withdrawing to the lab, he sorts through the remains of the elemental components and creats a pair of amethyst eyes for the injured young woman.

Recognizing that Myrma will one day likely inherit the family business, he incorporates a number of protections and benefits into the faceted orbs:


Unfortunately the faceted, unblinking eyes are off-putting, yielding a -1 to initial  reactions, and causing the already shy girl to be more self-conscious of her appearance.  Time will tell if Myrma becomes acclimated to the new eyes, and finds ways to grow her skills and confidence. especially in her first forays into representing the family business...
Posted by Vance A at 21:07 No comments: 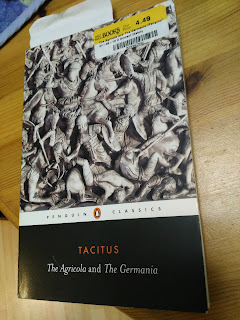 Tonight, a brief review of two of the Roman writer Tacitus'  best-known works - The Agricola and The Germania.

Tacitus lived in the late First-early Second Century, A.D. and was an administrator, senator and writer during his life.  He weathered Domitian's corrupt reign, and served in the Roman colony in Britain, likely in some administrative capacity.

His time in Britain was spent under the command of Julius Agricola - the commander of the colonial military and Tacitus' father-in-law.  Tacitus had ample opportunity to study Agricola's leadership style and document it for posterity.  Agricola had taken command of the colonial forces in AD 69, approximately 9 years after Boudica's failed rebellion.  Agricola secured Rome's hold on the island, a well as expanded the empire's influence, both by military action and expeditions (including as far north as present-day Scotland) and by assimilation and 'civilizing', including construction of Roman baths and theaters.

Tacitus wrote a glowing biography of Agricola, describing his administrative and tactical skills in glowing terms.  Good way to stay on your dad-in-law's good side...  But more likely a not-so-veiled commentary on the corruption and graft of the Roman leadership and society.

The second piece in the collection is the Germania, which may almost be considered a follow-up to Caesar's Gallic Wars. The Germania focuses on the tribes beyond the Roman frontiers formed by the Elbe, Danube, and Rhine rivers.  Tacitus catalogs the German tribes, telling of their sizes, dispositions and cultures. But again, he couches them in a sideways commentary on the Roman leadership, describing the honor and self-discipline of the 'uncivilized' Germans.

These two books are classics of early 'histories' along with Herodotus, Prokopius, Caesar, and other contemporaries.  Tacitus' writing style, as translated, is a straightforward, clear read.  I pounded through the whole book on a 2.5 hour flight.  Like his contemporary historians, he played fast and loose with details, and there are many geographical errors, as well as descriptions based on hearsay.

But where the books are useful, especially Germania, are as snapshot resources/inspirations for tribal groups a party may encounter in their journeys.  Tacitus describes various traditions, leadership, martial styles, and appearances of the various tribes - any of which may plucked wholesale, or mixed and matched for colorful and useful NPC groups. The Suebi have elaborate hairstyles, the Semnones may only enter a sacred grove while bound by a particular cord, Chatti warriors wear an iron ring until they have killed their first opponent in battle.  Some elect kings, or make decisions in raucous congresses, some are cheered in battle by their women. Fleet-footed warriors keep up with their own cavalry.

So a good piece of found inspiration - grab a copy or download and pick and choose your next barbarian horde!