I've been pondering divine scrolls and their synthesis.  A common thread of the rulesets for scrolls is time plus a certain value of consumable components to create the scroll. Based on the trope of the arcane class, the scroll is created via research or transcriptions, and the material components are likely associated with spellcasting or using rare materials for ink/illuminations to bind the spell to the scroll.

However, cleric/divine spells are not traditionally held within a spellbook, but are granted via prayer or inspiration from the cleric's deity.  So how would a divine scroll be transcribed?  And how is the monetary equivalent used?

Is the material value may be spent in tithes or proper sacrifices to curry the deity's favors (e.g. the 'fatted calf')? That could work.  Or...

Perhaps, since the cleric is the recipient or conduit for spells, then they may also act as the catalyst for scroll creation.  Therefore, that 'conduit' must be expanded to generate the energies necessary to transcribe divine forces onto a scroll.  And a common traditional method for a priest/shaman/cleric to get into strong and direct communion with the divine was through mind-altering substances.

So, like the above arcane components necessary to create a scroll, the cleric may require a rare drug (its quantity/value/rarity proportional to the level of the spell) to descend into a trance to best prepare themselves as the device through which the spell is communicated.  The spell is then transcribed via automatic writing or some similar trance-device.

Just came up with this while theorizing on what might inspire a cleric to be searching out loot or rare materials, which then descended into a thought-experiment of how were they going to transcribe those scrolls, anyway?  So feel free to take it or leave it...

"Yes, I'm Br'er Rombur of the Divine Zhiver.  I understand that you plan to delve the Caverns of Leromos.  I understand there are stands of a certain fungus found there that I use in my, umm, worship..."
Posted by Vance A at 22:20 No comments:


Found this on the table a couple of days ago - an ink doodle left by the kid or one of her friends: 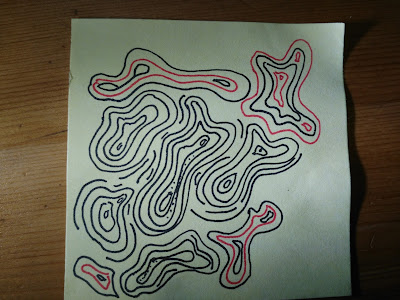 The Iqaiga Atoll is found out in the Southern Sea, past the Doldrums, and the last stop (if they can be found) before sea explorers cross the Great Deep to the Austral Lands...

The atoll is the last chance to refresh water before the long trek farther south, from small springs and rainwater catchments on the larger islands.  Additionally, some game and limited vegetable food may be foraged to ward off the effects of scurvy prior to the final long push south.

The outer islands of the atoll (red outlines) are the remains of a volcanic seamount, typified by basalt cliffs and black sand beaches.  The inner islands are the spines of submerged reefs that fill the former caldera.  Interesting sealife has been drawn to the reef, with its healthy habitat and nutrient-rich waters.

Mer-folk hold the northern islands. Reticent and reclusive, they are mostly glimpsed watching a ship anchor at the atoll from afar.  However, they are not above charming and drowning an errant sailor who strays too far from landing parties.

The mer-folk skirmish with sahuagin who encroach along the southern edge of the atoll, competing for the sparse island territory.  The sahuagin are not as retiring as the mer-folk, and have been known to attack an anchored ship, particularly at night.

Prehistoric beasts, including a variety of Dilophosaurus, live on the northeast island feeding on a variety of prey, including birds and fish from the shallows. The Dilophosaurus are stunted, a result of island dwarfism.  Unfortunately, the rats that they feed on suffer island gigantism. Winged reptiles patrol the skies around the atoll.

Caves within the northeast island contain obscure volcanic crystals that have value as foci for wands, particularly those involved manipulation of reality or time.  The crystals are found in crevices within still-steaming volcanic vents.  Although there is no chance of eruption, the vents release scalding steam and asphyxiating gasses, making any attempt to recover a few of the crystals a very hazardous affair.

The inner atoll is hazardous to pass through, and many ships are found rotting here, their crews long gone - preyed upon by the 'natives' or otherwise succumbed to elements and depredations.  It is best to circumnavigate the shoals and atoll with a ship and explore the inner atoll independently with small boats and landing parties, if at all.  Limited valuables reward parties who send longboats and divers to explore the atolls and wrecks.  Hazards include becoming trapped in the submerged hulks, toothy and tentacled fauna, patrolling/raiding sahuagin, undead accursed sailors, and the like....

Per my previous post, this is adventure 3 of 3 in my attempts at coming up with a serviceable One Page Dungeon contest entry.  This is actually the first of my three drafts, something that had been rattling about in my head for a bit.  My intent was to take a familiar undead monster, but to reskin it to make it much more dangerous and challenging due to a hidden resource.  I think that, although the idea was sound, that the scenario overall didn't have quite enough depth to really create an evocative environment, even with the 'butcher bird' imagery. That said, this idea is something I may return to/refine at some other time - I think that the idea of a hidden resource or link is a good theme.

Runner-up 2 - The Forest of the Shrike.


A similar-appearing wraith (though differently-powered, and slightly sillier) shows up in my final entry, and the map has similar layout (I think this one turned out a touch better).  Oh, the Clockwork Knight also shows up, as does the druid that is referenced in this adventure, but who I had to cut due to space and overpowered magic concerns.
Posted by Vance A at 09:19 No comments:

I sorta simultaneously worked up three One Page Dungeon contest entries, working from the theory of not getting to wedded to a single idea or conceit in my creative process. The three adventures are different in objective and tone (although there is a little overlap in encounters in two). So they weren't apples-to-apples when I was either writing or choosing my final contestant version.

I'm not sure if it created a better single product in the end, but bonus!, I have two spare dungeons to share.  I was having enough of a challenge to select one of the three, that I put up a vague G+ poll to allow the hoi polloi to assist in my selection process...

No. 1 is the runner up on my poll:  The Pyramid of Lake D'Juna - PCs are quested to recover a relic from a shrine located in a subterranean lake. The Shrine is accessed by two routes, the PCs can select either one, I think the challenges are comparable, but each is unique.  Once they get to the lake there are still a couple of 'environmental' challenges lurking, as well as having to solve a number of riddles to enter and exit the shrine safely....

One thing that I have to confess is that this is not all-original material - I recycled the "interesting fungus" from my treatment of Dyson's Owen's Mine map (variation 1). So although the rest of the content felt good, having shoehorned in some old content didn't feel quite genuine.
Posted by Vance A at 09:42 No comments: