The Dead Pet, an incorporeal companion...

Was on a run this morning when this song came up on the random feed on my player:

Mr. Cooper and his spiritual companion animal inspired a bit of magical/divine goodness...

Perhaps you had a stalwart war dog, well trained and fearsome; or a dungeon terrier, bane to vermin and quick to alert you of creeping foes; or maybe just a loyal hound, who followed you off the farm as you left to seek adventure.  In any case, they were a good dog.

But adventuring is as hard on dogs as men, and they met their eventual demise.

However, old Bowser went to heaven (as all dogs allegedly do) and put in a good word for you.  The Canine Gods heard this, saw that you had been a fair and kind owner and smiled upon you. 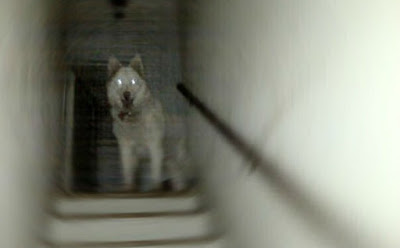 Dead Pet
An incorporeal canine, the spirit of an old adventuring companion, follows their former owner for a period of one year (+1 year per charisma bonus).  The original animal must be mundane, and may not have been a summoned creature, such as a magic user's familiar, or druid's animal companion.

The Dead Pet is invisible and generally goes unnoticed, even by its owner.  However, once per day, the Dead Pet may provide aid or interpose itself between the former owner and danger in one of the following three ways:

+matt jackson  is so kind to share his maps, even ones that he's not particularly happy with (more the medium than that content), that I figured I'd stock it up, even with its perceived shortcomings.

"The Cirdfhin Temple complex was constructed by the dwarves a generation ago for veneration of local battle-saints.  Carved into a cliff, it was home to dwarven clergy and acolytes.  Although the temple was consecrated and in use, the deeper rooms were still under construction.  Tragedy struck when an earthquake opened a chasm through weak rock that rended the passageways.  Taking it as a bad omen, the dwarves abandoned the complex, leaving behind many of the accoutrements.  It has since been occupied by less reverent tenants…"

Four in one island?

+Brett Slocum commented: "It's a big enough island, have all four things here."

Ok Brett, here ya go.  There goes the neighborhood.

Do not taunt Happy Fun Island.