Folks over on the OSR Discord have started sniping one another's Secret Jackalope prompts, adding to the variety, creativity, and insanity of the writing prompts.

And I need to loosen up my mind with a bit of free-writing.  So here's a request from user Sigmacastell: "1d10 Failed World-Ending Rituals"

First of all, a word from our sponsor: Tonight's creative muse is brought to you, in part, by Hellbent Kölsch.

1d10 (plus one) Failed World-Ending Rituals

(or, Eleven Reasons That the World Was Inadvertently Saved From Certain Doom On This Fateful Night)

Completed with some help from a few Random Name Generators.
* And, because user Jojiro was curious as to what constitutes a 'kerfuffle' when two apocalypse cults meet on the same foretold night:
Read more »
Posted by Vance A at 18:34 No comments:

Scaldwater: Another Little Town on the Coast

Quite some time ago, I ginned up the story of a little thorp on a spit, separated from the mainland by a decaying wall. Why it was there, why it was walled, what it role may have been in the local politics or economy...

So Jackson crafted up another little burg with a similar geography and form around the same time, by the name of Scaldwater Bay. 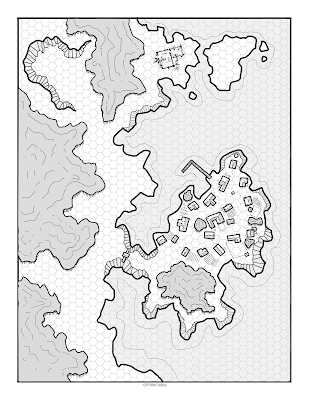 Like many maps and projects, it languished in the to-do list and backwoods of some notebook. In the interim, Matt crafted up one of the business establishments in the village, The Weary Wench, with a brief background, which I took it upon myself to expand.
Returning to Scaldwater Bay, I built out the remainder of the points of interests and personalities of note. It's been a while since I populated a town, so why not? And I needed to figure out where its name came from.
And in the name of completion, I folded the tavern in as its own expanded feature in the town description. Because, after all, a tavern is where it all starts...

A note - I uploaded this to itch.io, and will probably port over other selected works to that venue. Not that I expect to become a gaming dollarnaire, but more as the purpose of a tip jar.

A Return to the Abbey of St. Martin

So we were at the brewery a couple of weeks ago, and as is often our habit, the wife and I were doing our creative things. She was doodling in her sketchbook, and I was scribbling up some map content. In the back of my notebook I found a filled character sheet and a short adventure. So I handed her the sheet and asked, "green or purple?" (dice). And off we ran.

Jax is a human barbarian that the wife rolled up via the OSE Advanced Fantasy Characters supplement. She's all about long walks on the beach, looking for helpful herbs, and being somewhat sketched out by magic.

And as she was on her own in this adventure, I gave her the option of a buddy.

"Do you want a hireling or a war dog?"

"War dog." (I should know this already.)

Meatshields provided "Goober" from Central Casting. Above average hit points, and a "rescue" dog. Although we weren't sure if he had been rescued, or performed rescues. More on that later. As I've done before, many of Goober's responses to commands or situations were determined, in part by a 2d6 reaction roll.

Jax entered the old abbey, stepping carefully over the detritus of the entryway. She avoided the doorway to the left, continuing in and inspecting the floor mosaics. Jax felt that the pulpit area seemed a bit sketchy, so only gave it a cursory inspection (avoiding deadfall). The open door to the southwest was intriguing, and Goober was sent ahead to scout. Goober paused at the door and sniffed (2d6 reaction roll, neutral). Listening and peering in, Jax saw a large black furry lump. Recognizing it as a bear, she left it to its slumber, backing away slowly.

What's in my Discord inbox today?

You've been paired with Rook#1407, who wants "Take a non-intelligent DND monster of your choosing from the 1977 Monster Manual, like a Roper or Bulette (or a couple of real world animals) and 'speculatively evolve' it into a few distinct evolutionary niches. Basically, take that creature and specialize it into a new environment or ecological role for several dozen million years and see what happens to it. It's more biological that putting gills on a Rust-Monster if it evolves into the oceans. Here's a great example; https://sites.google.com/site/worldofserina/home. Points for stats. Ten thousand million points for a couple of sketches of your new creatures. "

Welcome to Secret Jackalope 2022. Been a couple of years (or maybe I just missed last year's effort)?

Through assimilation of genetic material over generations of scavenging and predating, at some indistinguishable moment, the gelatinous cube reached a tipping point to gain an alien intelligence, after a fashion.

The body form modified from a cube into a lobed protoplasm that extruded throughout its territory, slowly creeping, branching and creating sensory nodes of massive neurons to "feel" its environment. The evolved "hegemonic cube" became a decentralized intelligence, with each nerve center sharing a portion of the creature's intelligence and memory, a redundant, multiple-parallel network.

Creatures of humanoid intelligences, or those similarly evolved, speak of feeling a 'static' in their minds upon approaching one of these slow-moving minds. Those who attempt to probe the cube's "minds" by mental means are often met with blasts of howling psychic energy that can stun, blind, or even destroy a mind.

Although light sensitive, the "hegemonic cube" has no true vision, relying instead on the sensory input of chemical means. Likewise a "cube" will communicates with other colonies of its type via chemical means - establishing boundaries, or sharing memories and resources.