The Hallucination Made Flesh

So I added to my list of sketchy camp followers a couple of weeks ago, and #25 was evocative enough to me that I needed to expand on the idea... So here ya go, for whatever it's worth...

The Hallucination Made Flesh*

(An NPC companion for a PC who got into a batch of REALLY good mushrooms.)

Occasionally the powers of our minds and illusions are so great, that dreams or visions seem real. And even more rarely, does that mind-altering trip, perhaps in search of enlightenment, inspiration, or an experimental mode, rip a hole in reality, letting that dream enter through.

That hallucination that you swore was so real last night while under the influence of those halfling-grown shrooms, or that sparkly powder you bought off that gnome? Well, it just showed up to breakfast and helped itself to the bacon.

Perhaps your buddies can't see or hear it, but it's there, plain as day, and it just introduced itself as “Hank.” It seems harmless, and friendly enough. Although the appearance of a bug-headed six-foot-tall bunny is a bit off-putting.

But the next time the charlatan illusionist tried to fear the party away, his conjurations had no effect on you. “Don't worry, I got you buddy,” says Hank.

OK, so the odd looks from your companions as you talk to something only you can see might just be worth it.

The Hallucination Made Flesh

AC: 7/14 if visible to opponents, otherwise 0/19. Illusionists and creatures with mind control or displacing abilities have a 2 in 6 chance to see a Hallucination Made Flesh.

Attack: Non-combatant. Will use trait from Defense table, below, if attacked.

*This is for parody purposes only, and is not intended to make light of addiction, trauma, or mental health.

The Banshee's Tower play and thoughts

Another Sunday, and another brewery session.

I had two returning "customers" and three first timers - All of the newcomers were familiar via 5e, so explaining the pared-down world of B/X was fairly straightforward.

The three chose from the pre-gens: a hill dwarf named Braddock, a tea-aficionado halfling, and a not-too-bright but well-meaning fighter named Bonk. Frederick the "antiquities collector" returned. The fifth player chose a librarian elf after test-driving a heretic cleric in the last session.

The party met in Neuförde, as we've done the last few sessions. I had re-stocked the prior session's adventure, in case they were interested in returning. With a tepid response, I offered the alternative to investigate an abandoned fort rumored to have been owned by the Matuli family, whose signet ring was recovered from the goblins. This new investigation was acceptable and the party trooped into the foothills to find the tower.

Oh yeah, the locals call it The Banshee's Tower for some reason. It's probably nothing.

The Beave-phant, coming to a swamp near you!

Ok. So the wife picked up this thing on impulse: 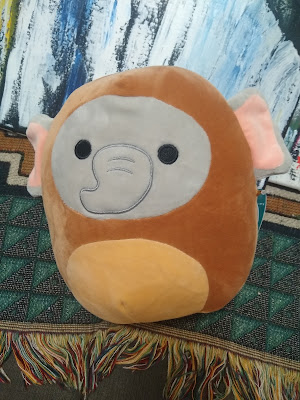 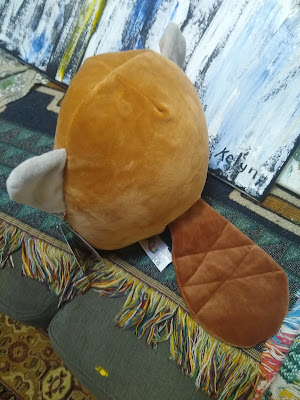 Apparently it's a plushy called a Squishmallow. And although the character tag claims that this particular plushy (reportedly named "Mila") is an elephant wearing a beaver costume, we of the adventuring community know the truth.

This is yet another unholy chimera, redolent of the owl-bear.

Do not let Big Plushy lie to you.

Denizens of the meandering savannah rivers, the beave-phant is a dwarf pachyderm hybridized with a beaver by someone who thought it was a good idea.

Ancestor-elephant tusks have been substituted with large chewing teeth, which the creatures use to fell trees for construction of their dams and massive lodges. After felling the tree, the beave-phant will drag it to the waterway, manipulating the log with its trunk. The logs are then stacked and woven together and wattled with excavated mud to build their structures. The dams can block rivers, create lakes, and redirect waterways. Additionally, the beave-phants will excavate into the riverbed to create underwater accessways into their lodges. Where an infestation of beave-phants occurs, they can significantly impact river navigation, canal integrity, and riverside communities and agriculture.

Beave-phants live in small family groups, with a matriarch accompanied by one to two generations of her offspring. The females tend to have a retiring nature, and only act in defense of their family pods or lodges.

Bachelor herds comprised of semi-aquatic, non lodge-building males migrate between water bodies, seeking mates and sparring with one another for territorial dominance. The males have been known to wreak havoc on crops, as well as excavating furrows through saturated ground during their foraging. The males tend to be overtly aggressive, confronting intruders into their territory, whether beave-phant, other large herbivore, or humanoid. The males will often occupy ponds and lodges abandoned by matriarchal groups or other beave-phant.

Abandoned lodges find other semi-aquatic occupants, including the lizard-folk, who may share the environment with the beave-phants. Beave-phants tend to be wary if not defensive towards lizardfolk, as the latter have been known to hunt beave-phant. If a matriarch or male recognizes lizardfolk who have hunted their kin, they will attack on sight, with no quarter.

While these aquatic pachyderm-hybrids don't have the valuable tusks of their uncorrupted kin, the heavy chewing teeth can fetch a good price with some ivory collectors (1d6x50gp per tooth).

More of Who/What has followed the party?

Just putting out a bit of content of the random sort today. A long-awaited continuation of  "Who/What has followed the party?" Because random mooks and ne'er-do-wells are always "helpful" to saddle our otherwise serious and upstanding adventurers with...

And updated the Chartopia table with the expanded list of characters...
Posted by Vance A at 16:44 2 comments:

Well, wow. I ran my second open table Meetup OSE brewery game Sunday night. This time, I had a full table signed up. Crap. Better have an option or two for a larger group.

My coworker Chris (as Frederick the Thief) was to attend, so I had one known quantity, but others were new. Fun fact, Chris had played in a epic multi-year campaigns in his youth. Where the final characters were the grandchildren of the original characters, and were tapping out at epic levels. So he's got a bit of experience...

Everyone else was a ??? I had gotten a note from one player that it was their first time, other than listening to some podcasts. I assured him that was sufficient experience.

Turns out, of the five new players at the table, four had NEVER played an RPG. One had played a little 5e and a Star Wars RPG.

Flip the pregens out, give the sales pitch on the character classes and some how-to's. Hand out dice (I had bags of gimme dice just in case, and I gave them all out). Run through the overall basics of RPG - describe situation, actions, roll dice if things are questionable. And you're a team.

Like last session, I warmed up the table with some questions on backgrounds and character relationships. Elf seeking estranged father, disillusioned cleric, thief a disinherited noble, an oceangoing dwarf, and a fighter who left the farm in search of a mythical chicken. The usual.

A quick shuffling through the scenario pile and we're hunting goblins in the "Notebook Failure Dungeon."

I gave them the usual "goblins raiding farms" pitch, and that the abandoned dwarven temple may have something to do with it, and we were off.

The party entered the complex, and were confronted by the earthquake-caused chasm at the entryway. A bit of back and forth and a rope was secured across to traverse. When one PC asked about climbing in and out of the cavern, I (encounter roll) mentioned that they heard something in the dark below, and this:

...was visible at the edge of their torchlight. The PC chose to shimmy across the rope.
Read more »
Posted by Vance A at 21:57 2 comments: