The Village of Croftsfford sits on the east bank of the Tisov River. The town founders built on two low mounds above the floodplain, reinforcing their settlement with a pair of levees north and east of the settlement. Buildings not on the mounds tend to be built up on four to eight foot tall stilts. The village straddles the West Trade Road, and provides a brisk ferry service at a narrow spot in the river above a small rapid.

Travelers will spot the multi-colored roofs of the village's residences and shops at some distance. How a wilderness town came to be so gaily painted is open to some speculation, but the truth is that an over-weighted peddler's wagon toppled off the ferry several years back. The unfortunate peddler perished in the river, and the residents scavenged what they could, including many tins of pigment, which were mixed with tallow and re-purposed as paint.

The north levee and adjacent floodplain is lined with a rough palisade, with a watchtower overlooking the river.  The defenses are primarily a deterrent to raids from troglodyte tribes upstream. The troglodyte raids are an attempt to dislodge the humans from the mounds, which are actually ancestral troglodyte burial tumuli raised above the surrounding floodplain.

The Orange - Greatly feared and suppressed, huge bounties for its recovery (and preferably, destruction) have been posted by kings and conquerors. It contains spells for the hegemonic connection of great forces, such as controlling an army, and causing it to move and act as a single mind. Current rumor implies that the death cult of Burver the Ever-bleeding intends to find it, and put it to use, plotting to cause the population of the city-state of Kinitan to march into the sea to its death.

The Red - Chants from the book are said to protect plane-walkers and other inter-dimensional travelers from the incorporeal guardians and watchdogs who seek to rend the sanity and souls of those with the temerity to intrude into planes or realities where they do not belong. Later chapters describe hopeful methods of regaining souls lost to inter-planer predators and demons.


The Green - Anyone reading this book will have to fight a distracting buzzing of the teeth or lose concentration while trying to decipher its runes.  However, researchers overcoming such distractions will gain knowledge of sundry obscure acids, and insight into the creation of a Universal Solvent.

The Blue - Lost in a deep well and guarded by a mostly-invisible cat - only its ears and massive clawed paws are visible. The guardian feline may only be driven off only with weapons of legendary quality. Crackling with energy, a reader's hair will stand on end. While the book is open and being read aloud, the user is immune to electrical attack. Held within the pages of the book is the spirit of an ancient blue dragon, Craeworeuth, trapped by a sorcerer who manipulated the dragon's hubris. The spirit, once freed, will act as a guide through the great Eastern Desert, its old territory, which no man has crossed.With enough cajoling and flattery, the spirit may tell great stories of its consort with the thunder gods.

The Black - Compiled by the Alchemist/Magister Deloc the Fourth, wrapped in an iron cover, smelling slightly of sulfur and cardamom.  Research of the texts allows users to access methodologies to create golems, particularly earth and metal-based, for one-half of the exotic materials cost.

The White - Wrapped in superficial sheepskin, the pages appear blank, other than a few faint water-stains.  The text appear only once every few years under certain alignments of stars and planets, revealing prayers and rituals to speak to angels. Angels are happy to converse, as the afterlife is dull and flat. However, this boredom does lead to some mischievousness, and any individual making contact with an angel will likely find themselves under a geas to pursue some absurd quest or acquisition.

For the gamer that has everything II

In case they already have their set of depleted uranium dice...

Mammoth Ivory D20s, made from the tusk of real-life extinct pachyderms.

Apparently the first run of 24 is sold out, but more ivory is said to be procured for another batch.

You, too, can roll criticals with the teeth of a beast that failed its save vs. extinction.

(From Artisan Dice - makers of insane art-dice)
Posted by Vance A at 10:28 No comments:

Dude, my armor has fantastic abs.

A recent article on Vox discusses the hows and whys of the sculpted Greek bronze cuirass.

After all, it was about looking good... 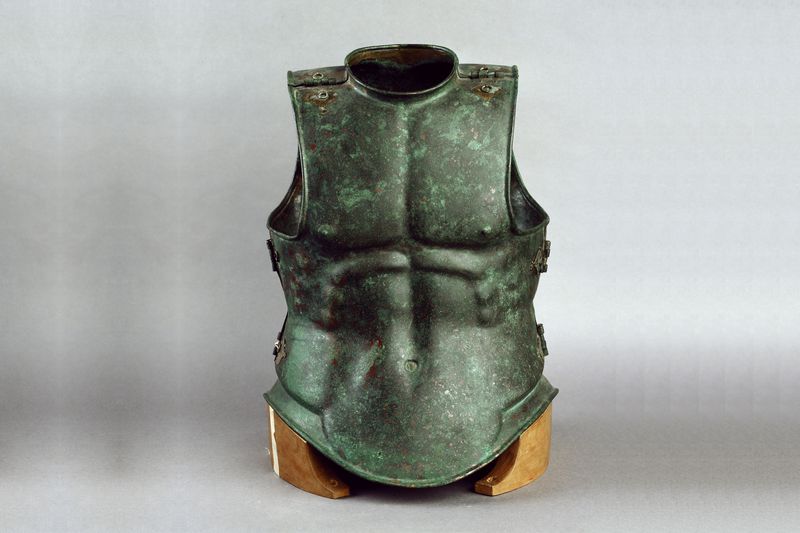 
1 in 20 chance that the embellishments impart a special quality upon the armor (80% positive, 20% liability)
Posted by Vance A at 16:56 No comments:

Another day, another odd little town out among the fringes:


Thanks to David Lewis Johnson for putting this one out there.

Out on the periphery of the Blightlands stands the hamlet of Pilor-Salath, an odd assortment of stacked homes. The hamlet, situated on a barren alkali flat, is partially stilted, as to withstand flooding. But everyone knows that the land has not been inundated since the Blight rained down on the land generations ago...

Some say the flats amplify the mental acuity of those who seek certain truths, whether due to strange geometries of the land, or from magical residue within the biting dust blown across the playa.

Samsul Quin, a desitiute cleric/seer lives in a suspended ball-hovel referred to as the Hive with his three wives.  Each morning he ejects the "three harridans" and meditates, awaiting the Word of Truth from a Rosartia, a goddess of things long forgotten.

His son, Ager Quin lives in two stacked balls on the ground level, below.  He, in turn, meditates in search of revelations from Attrecoppea, a goddess of very small spiders, who reveals small truths through the little black eyes seen gleaming in the shadows, or from beneath the cabinet.

Vyswar Veloje lives in an observatory perched atop the central apartment tower.  He watches for the return of a foretold comet, at which time he will lead his followers in a group ritual of self-immolation to ride the comet to the fabled Greensward Lands.

The Kroger Family lives in the Balanced House, suspended atop the stacked longhouses. They spend most of their time carefully rearranging furniture and knick-knacks to keep the house in place as they sing lilting hymns to Diit’Wentii, a god of minutiae. Dinner parties are a nightmare.

Near the center of the village is the 'tower hut,' the first structure of the community. It shows the architecture of a wet land, thatched and built on stilts. Its thatching is periodically refreshed by pilgrims visiting from humid, tropical lands.  An old woman named Semina crouches here, silently communing with Tlacotani, a god of sudden inundation. She hasn't spoken in years, but is ready to reveal one of the Ultimate Truths. Either that or request a long-desired delicacy.

Apartments fill the tottering tower at the right end of the settlement. They are filled with travelers seeking the wisdom of the resident ascetics, and individuals seeking revelation or insights from their own gods and prayers.

Anchoring the left end of the village is  Ume Polck in his cramped store. Each morning he opens his awning to let in the morning breeze as he sends his nephew Abelo with the oxcart hauling old brewery tuns to bring the village's water from a spring at the edge of the playa.

Rou Banwright, a blacksmith, stumbled upon the settlement during a blinding dust storm.  She remained to craft intricate fittings to suspend the walkways between the dwellings. They are light but sturdy in the desert winds. Rou is an avowed atheist, but her dreams are disturbed by songs in a thousand voices.

The community's halfling barber, Azid Tull, holds forth in a cubby within the balanced houses.  He believes that hair may be a conduit to evil spirits, and attempts to shave everyone's head, or at least leave them well-tonsured. Oddly, he has waist-long dreadlocks.

Nuggets of wisdom include why all dice rolls ( including the DM) should be made in the open, the joy of creating back stories, and why it's OK to kill off your 8 year old's PC at a con.
Posted by Vance A at 11:09 No comments: