King Sundosiaya reclines coiled in his chambers, huge and ageless.  The massive serpent is experienced, wise, and quite lonely.  A failed bargain with a demon prince long ago trapped the once-impetuous prince in this reptilian body.  He sighs, flicks a discarded crown with his tail, and contemplates old magics and philosophies. 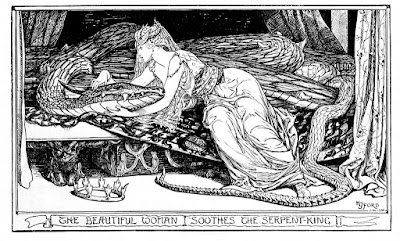 This age does come with some benefits.  His council is greatly sought after, and human leaders jockey for his favor and advice, believing Sundosiaya to have divine (or demonic) wisdom and powers to grant good fortune.

And as a tribute, the human King Eldias has provided Maeve, his own second daughter, as companion and consort to the Serpent-King.  She stood, quaking at the door of his chambers as the king’s guards beat a hasty retreat.  Tales of this wise and terrible beast who causes royalty to prostrate itself before him give them reason to not tarry.  After all, he is said to be a demon prince, and Maeve’s likely fate is to be consumed by his base, reptilian instinct…

Expensive tapestries and other trappings drape around his sturdy bed.  Chests of treasure peek out from corners and nooks, past bribes and tributes to the reptile.  Sundosiaya languidly raises his head.  “Come here, child. It has been centuries since a young lady such as yourself has graced my chambers.”  He lets out a hissing chuckle.  “I was, after all, quite the gadabout in my youth….”  His ancient, ophidian eyes go distant, and Maeve sees hint of a surprising sad warmth in them.

Trust is earned slowly, and in fit and starts, as in all these tales.  Each day Maeve comes and sits with the King.  Initially her chair is in the farthest corner of his chambers, and she perches on it, as a squirrel ready to dart from a hound.  He talks, telling tales of his age, of visitors, both wise and foolish.  He does not care if she listens.  Eventually, the chair gets moved closer, and she asks questions.  Clarifications of stories.  Explanations of old mysteries.  Opinions on holy tracts.

And she finally asks about his form.  Sundosiaya sighs, pauses, and tells her how he, as a foolish, haughty young prince, believed that he could outwit one of the demons in exchange for wisdom and power.  But the demon was vastly older, and had heard similar requests before.  And he twisted the prince’s request to be ‘clever as a snake’ into something much more terrible….

Now she sees the prince’s eyes under the heavy scaled brows for the first time.  She sits on the edge of his bed, takes his massive, fanged head in her arms, and tenderly strokes the cool scales.

“So,” Sundosiaya whispers, “old King Eldias as pawned his second daughter off on me.”  It is Maeve’s turn to sigh. “Yes, I know the ways of the world – the firstborn gets the land, the dowry, the advantageous marriage.  And you, the second, find yourself with some rude dowry or a commission to the convent…  Or left to be eaten by the dragon…”  They both laugh now.

“So, because he was a fool to doubt your value, but because he did give me the gift of a worthy companion, let me teach you a few things…”

And thus, when Eldias passed on, Maeve the Forgotten, consort to the Serpent-King, returned to the capital, deftly deposed her elder sibling, and ruled, wise and fair.

Written for Eric Nieudan’s The Henry Justice Ford Monster Manual Project. This monster ('Serpent-King') is released under this license:  https://creativecommons.org/licenses/by/4.0/

edited for format
Posted by Vance A at 15:41