Can't stop ...  Ford's works are evocative and ripe for the picking.  This time, a small bird-creature confronting a skeptical sailor... 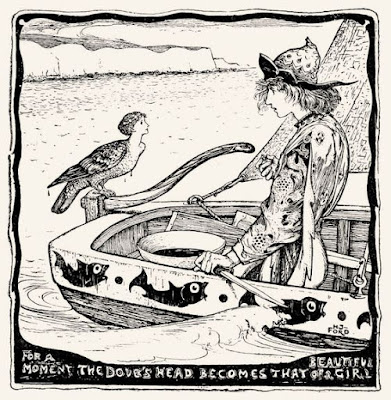 Appearing as a small flock of doves, Columba-Sirens may raise alarm among boatmen in the fjords and rocky archipelagos where they tend to congregate (In fact, a group of these creatures is referred to as a congregation...).

The doves flock to boats as the fishermen cut bait and chum the waters for their day's catch.  Unwise fishermen will attempt to chase the creatures from their bulwarks.  Those who repel or molest the creatures may incur their wrath, as the sirens transform, revealing human heads on their bird bodies.  The creatures will sing, effecting a charm on malicious boatmen, much like their mythical sisters.  However, due to the diminutive size, their powers are likewise diminished.  Saves vs a single columba-siren are made at +4, with a penalty of -1 per 2 additional sirens (i.e. 5 birds would save at +2).  The sirens will attempt to charm the boatmen into shoals or onto rocks, where their boats will be grounded or sunk, and they may become prey to other malicious creatures of the shallows...

However, if mariners shows kindness to the bird-creatures, such as sharing the catch, the sirens will guide them through hazardous passages, or may even act as spotters for productive schools of fish.

Written for Eric Nieudan’s The Henry Justice Ford Monster Manual Project. This monster ('Columba-Siren') is released under this license:  https://creativecommons.org/licenses/by/4.0/
Posted by Vance A at 07:49