One more for the Henry Justice Ford Monster Manual project (taking contributions through 7/31). 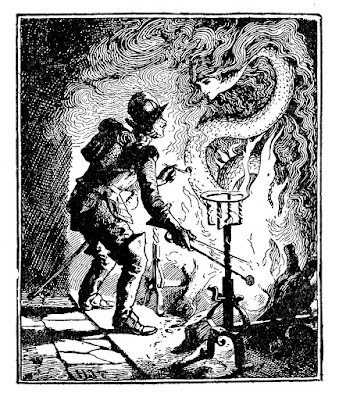 Phasing in from the Plane of Fire, the Fire Naga may take an unfortunate unawares as she emerges from a hearth or forge, which she uses as her gateway between the Planes, or perhaps where she has simply been taking a respite.  Fire Nagas are often summoned as spies or servants by elementalists.  However, as a mercurial denizen of fire, they may also be dangerous and unpredictable, with a 10% chance/day to either turn on their summoner, or to choose to follow their own agenda. In combat, she may spit a gout of flame as an attack or defense, or constrict a foe. She will also have access to the following spells: Charm person, heat metal, pyrotechnics (each up to 2/day), and fireball (1/day). If pressed and in need of retreat, a Fire Naga may escape by teleporting through fire, either back to the elemental plane, or to another mundane fire within one mile of her current location.


Written for Eric Nieudan’s The Henry Justice Ford Monster Manual Project. This monster ('Fire Naga') is released under this license:  https://creativecommons.org/licenses/by/4.0/
Posted by Vance A at 10:30