What's up with these little fellows, stumbling along arm in arm as a band of revelers closing down a bar? 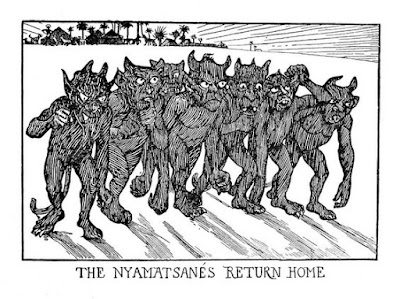 Little black-skinned demon-goblins swarm out of desert, raiding oasis settlements on moonless nights.  Their anarchic goal is not loot or blood, but dairy...  For the little creatures become intoxicated on milk, accosting dairy animals, raiding milk-barns or looting larders for butter and cheese.  Settlements may withstand their nocturnal predations, only to see the raiding groups return to the deep desert as dawn breaks, stumbling drunkenly and sated until the next moonless night.

Due to their infernal heritage, Nyamatsanes take half damage from normal weapons; however, holy water burns them equivalent to fire. Unfortunately, harming or killing these pilferers is exceptionally difficult. By some mechanism of their conception, the little buggers' vitality is linked, as a hive-being.  Rather than harming an individual, damage is distributed through the bodies of the raiding group...  When half of the group's cumulative hit points are expended, they will flee as a noisome mass, supporting one another and limping into the night.

Written for Eric Nieudan’s The Henry Justice Ford Monster Manual Project. This monster ('Nyamatsanes') is released under this license:  https://creativecommons.org/licenses/by/4.0/
Posted by Vance A at 15:48