Another of Dyson's creations filled and fleshed out.  I'll often disregard Dyson's brief descriptive narrative that he includes with his maps, but this one called for a direct translation and populating.  I mean, liches are bad enough, but add a wildshaped druid to the mix?

And what hangs out in his proximity to harry and wear down the party as they search out the lich's lair for whatever end-game that they pursue? 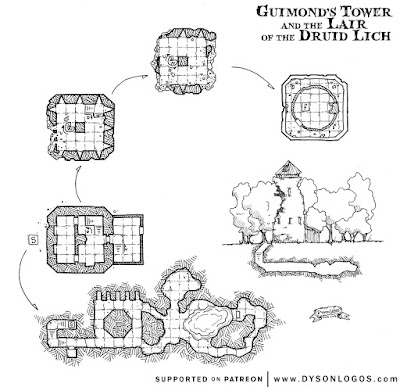 Built out using Sword's & Wizardry, but easily bent to your favorite rule-set...

This is the first time I've crafted up a high level/final boss-style big-bad, so I'd be happy to get feedback/suggestions on rounding him out.
Posted by Vance A at 21:59