This is Ella (the other cat in the house who isn't Max).  Yes, she looks all sweet and innocent.  Yes, she's being cute here.  Yes, she's baby-seal soft and cuddly (on her terms, she is a cat, after all). 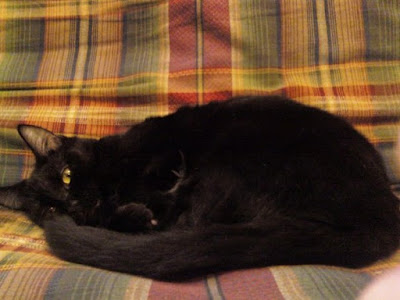 Don't let that fool you.

Because, as far as we can tell, this cat's skull cavity consists of a mucous gland.  We've seen vets, given her different medications, experimented with diet and supplements.  Nope - this is Snotcat. It's chronic as far as we can tell.  I suspect she has a cat allergy.  However, we have found citrus-based cleaners to be most effective at removing cat snot from various surfaces.

Unfortunately, she also has the tendency to sleep on my head.  Which means I occasionally get sneezed on in the middle of the night, necessitating a clean pillowcase.

Living in the dark, humid subterranean places, the mucous dragon may appear to be a stunted, malformed relative to its more graceful and intimidating brethren. Pudgy, with blunt, webbed toes, it looks like it should be lazing in a pool somewhere. The dragon is sheathed in a opalescent, almost translucent hide, typical for its lightless, subterranean environs.  Bulbous eyes regard interlopers into its lair, and over-sized nostrils dominate its snout.


The mucous dragon appears ungainly, until it slithers off its perch or hoard-pile, or suddenly climbs, gecko-like across the walls and roof of its lair. The awkward appearance belies a serpentine grace, with the dragon striking quickly, lunging towards its unsuspecting targets ...

Where the usual dragon has its breath weapon, the mucous dragon has, well, a sneeze weapon to immobilize its prey/foes. Expelling a thick mucous gout from its snout in a 30' line, or 15' diameter cone, the mucous dragon targets either the apparent strongest fighter or mage with its viscous weapon. Stricken targets are immobilized, similar to a web spell.

Once "webbed," the target requires 1 combat round per dragon HD to break though the snot (-1 round/STR bonus, minimum 1 round).  As a viscous fluid, it cannot be burned or cut. The sticky residue requires a saving throw or the target takes a -1 DEX penalty until the mucous dissipates (1 hour or removed with a citrus-based cleaner).  There is also a 5% chance that the target will contract "dragon flu" (1d6 days of serious congestion and eye goobers: -1 to CON-based saves and to-hit rolls).