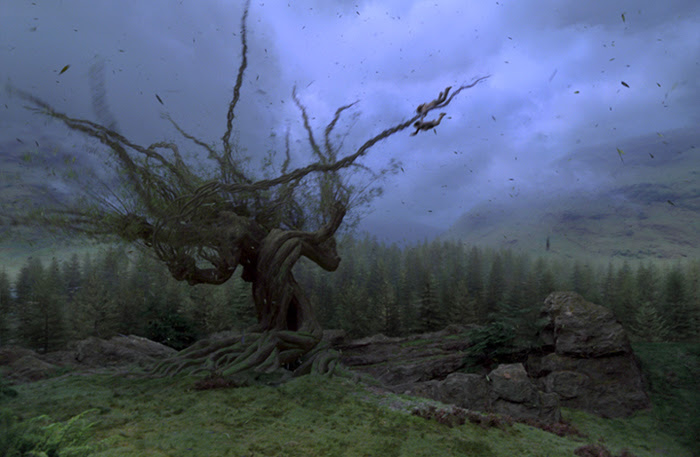 I've looked, and haven't really seen any stats for one of modern literature's favorite belligerent plants from a lovely series of young-adult books and movies regarding the adventures of a young man of magical leanings and his friends and instructors at a certain academy...

(The other, of course, being Audrey.)

This large to huge tree is established as a guardian to passages and hoards.  It strikes with a flurry of limbs, reaching up to 20 feet from its base.  The tree is generally aggressive to all except one or two people it has been conditioned to allow passage.  Some shape-shifters may also pass, as it generally does not recognize animals as a trespasser, likewise, invisible creatures may pass.  The tree may be immmobilized for one turn by pressing a knot between two large roots at its base.  The knot is hidden, and there is a 5% chance per round (cumulative) to spot.  The knot may be hit by missiles at -4 penalty.

(Statted per S&W, although easily convertible)

(I suspect that I am missing a detail or two about this fearsome guard-plant.  Feel free to edit or make suggestions).