Well, I just returned from Bishop, California, and I should have been sending projects...

... but had evening downtime, so I fought with the Blogger app to cobble together an entry for this week's Topic Tuesday. (I'm probably the only person who does this, but it's an excellent freewriting exercise for me...)

The random generator gave me "Looting Hoards beside(s) Vices"... I got nuthin'.

...but I have been reading "A World Lit Only By Fire" and the topic suggests one Girolamo Savonarola and his sermons for austerity and against the corruption of the Church's hierarchy.   Although he did not invent the concept, he is remembered, among other things, for his puritanical lectures and "bonfires of the vanities" where congregants were influenced to throw cosmetics, art, books, jewelry and other "corrupting" items on fires in a city square in Florence.

Savonarola eventually pissed off Rome enough to be censured, then excommunicated, and finally branded a heretic, allowing him to be tortured and hung by the authorities.

He remains influential for a few reasons.  His name is linked to opposition of the Medici family of Florence, as he helped create a short-lived popularly-elected government during the Medici's temporary ouster from the city. Although he was considered a prophet, he did not great or maintain an effective power base, and was criticized as such by Machiavelli in his writings.  And Savonarola's writings and sermons were read and deeply influential on the eventual leaders of the Protestant Revolution.

Besides, he had quite the impressive schnozz. 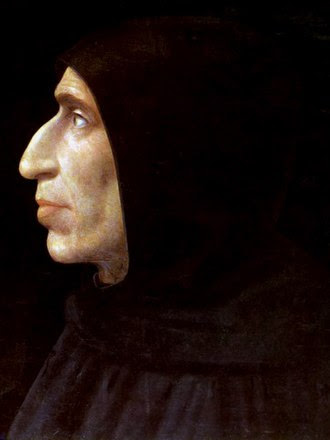