The Catholics had some pretty cool +1 swords...

Here's a list of historical weapons wielded by warriors and nobles in the name of one sect of followers of one of our favorite Invisible Sky Gods.  (Yes, I'm being a bit flippant and sacrilegious).  That said, look at the stories/myths behind these weapons, and how they stack up against (or perhaps influenced) the weapons of fantasy: Glamdring, Stormbringer, Grayswandir...

(and yes, there are plenty of other legendary swords and weapons of both Western and Eastern culture that likely informed classic and modern fantasy writing and gaming).

We've got swords made with relics from dead saints, a sword broken/blessed by an angel, a lance that killed a dragon (or Wyrm), and a spear used to kill a god (or son of a god, depending on how one interprets their Trinity).  If those qualities don't score you at least a +1 for your weapon, I don't know what will... 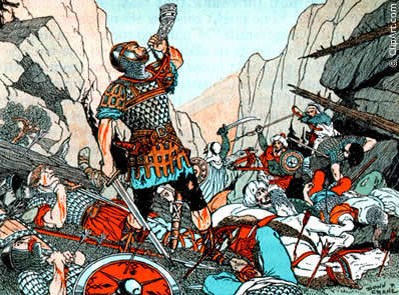 More on Longinus
Of course, there are a few "Spears of Destiny"