Back to Adventures - The Sinking Temple

We once again return to the scattered small adventures culled from some Jackson maps. This map was included in "A Collection of Presentations Cartographical in Nature," a selection of five maps Matt had produced for his Patreon, back in the day. 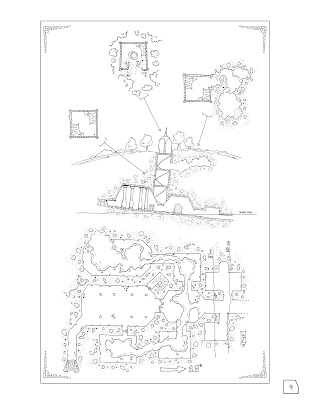 Again, this one had a good space to work with, and had to have an interesting story behind it. After all, how does a temple with a three-story tower "sink" into the ground? I chose to sink it, instead, by inundating it with a lahar.

Never mind that a building hit by a fast-flowing concrete-like slurry would have likely been collapsed. We're in fantasy-land. We need a buried building that's been knocked off-kilter. I can let geology slide now and then...

In this case, a lahar happens when you neglect to ask the god of the temple if they mind that you are changing patrons (Spoiler, they do mind). You get thwacked by a mudflow, and the god leaves in a huff.

And, as happens, other things move into the abandoned space, and they bring their pets with them.

So, enjoy your explorations of The Sinking Temple. As always, watch your step.