The Tabaxi as an Old-School PC Class

It has been decided that we would run a contest to see who could make the best class! The way this contest works is that you sign up below and make a class, very simple. The start date (May 30th) is when you should have submitted your class and voting stars and the end date (June 2nd) is when voting closes. Anyone can join, the only requirement is that you sign up below and then make your own class, which you will submit by sending it @sivinus (me).

Good enough - I've done a few character classes in the past, some more serious than others. And it's a fun exercise to build out a class, typically with some help from random inspiration and some math help by Building a More Perfect Class.

And as much as I wanted to just enter The TechnoViking, I figured new class for new contest.

Serendipitously, I've been perusing the Fiend Folio for some other inspiration on a writing prompt. And I noticed this somewhat familiar critter: 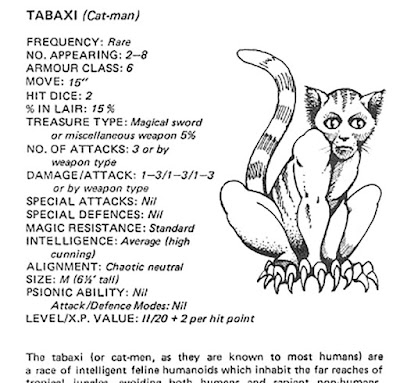 So yeah, the tabaxi have been around since 1981, but weren't an official character class until they were ported into the the current edition, as far as I can tell. There were a couple of other playable cat-folk races, but "tabaxi" as a player race appeared in 5e. And from occasional perusing of 5e actual plays - people apparently like to play cats.

Ok, so back to the source material. I'm not a 5e player, so other than watching some cat PCs, I'm not a subject matter expert. But I do like to convert or create player classes back to B/X. And I have the Fiend Folio.

So here we go.

Cat - so obviously a DEX-based race. The "tabaxi rogue" is pretty much redundant. Let's grab some elements from the FF, and just because, add some climbing/falling qualities for a feline.

Here kitty kitty.... Hailing from tropical jungles out past the bounds of “civilization,” you're a stealthy feline humanoid astute to the ways and pitfalls of the forested world. When curiosity gets the best of you and you venture among the hairless monkeys of the world, you often serve as a scout and hunter. Shiny things are distracting, and although you have little interest in coin, trinkets and mysterious artifacts will catch your eye...

Clothing is a nuisance, but that feline agility provides you a natural armor class of AC 7/12. Leather armor is permissible, if you must. Anything heavier messes with your cat-mojo. You prefer your weapons light, and normally keep one hand free. If you do choose to go unarmed cato-a-mano, you can bite and claw your way out of trouble (three attacks per round, 1d3 damage each).

Climbing's nearly a sure thing in the natural environment (trees, vines, cliffs). In the built environment, you take a 10% penalty, but still not too shabby. If you do slip, however, you land on your feet. Falling damage is reduced by one die per 10' height interval at 1st level (ex. 30' = 2d6 damage), with an additional die reduction every three levels.

Tabaxi are stalkers, with an uncanny ability to disappear from sight. In undergrowth or the woods, you can hide with a 90% chance of success. Indoors, you can slink into the shadows or behind other forms of cover with a 2-in-6 chance of success as long as you remain still.

As a hunter, you know your traps, and won't get tripped up in turn. Traps laid in the outdoor environment (ex. pits, snares, deadfalls) are spotted on a 3-in-6.

And you have infravision to 60 feet, because, you know, cat.

And because I also have the Advanced Fantasy rules, gotta build to that as well. As mentioned before, DEX-based fighters and thieves are in there, as well as the ranger, because nature-stuff. Added the Bard and Druid, because why not:

Tabaxi are feline humanoids hailing from remote tropical forests. Lithe and lightly-built, adults range in height from 6 to 7 feet, but rarely tip the scale at more than 200 pounds. Their fur may express any feline patterns, and tabaxi tend to wear a minimum of clothing to both remain unencumbered and to “show off their stripes.” Curious, some individuals will leave their prides to venture among other humanoids, serving as scouts and hunters as they collect knowledge and trinkets.

Combat/Natural Armor: A tabaxi's feline agility and presence grants them a natural AC of 7/12. Tabaxi may wear leather armor, but do not use shields. They may use one-handed weapons, slings, and bows. If unarmed, tabaxi may make up to one bite and two claw attacks per round (1d3 damage each).

Climbing and Falling: A tabaxi may climb natural surfaces (trees, vines, cliffs) as a thief of the same level. If climbing man-made surfaces, they take a 10% penalty. Tabaxi land “on their feet” and falling damage is reduced by one die per 10' height interval at 1st level (ex. 30' fall = 2d6 damage), with an additional die reduction every three levels.

Stealth: Tabaxi fade from sight in the forest, with a 90% chance to successfully hide in that environment. Indoors, provided there is shadow and cover, they may hide with a 2-in-6 chance of success.

Trap-Finding: A tabaxi will spot a hidden trap in the outdoors (ex. pit, snare, deadfall) with a 3-in-6 chance of success.

Infravision: Tabaxi have infravision to 60 feet.