Martin Thomas of Daddy Rolled a 1 recently put out a few threads regarding inspiration and playable content that may be kid-friendly for adolescents. I've talked with other friends with young-uns about gaming, before, as well, and gotten the "kid-friendly" question, as well. I discovered that I have (inadvertently, perhaps) written a few adventures that might be suitable for the kidlets.

And, since people may be stuck at home and getting some "quality family time" in over the next while, having a few play options may not be the worst thing.

So here's my list of six+ adventures.  Feel free to download, tweak, play, and let me know how it goes!

OPD 2016 – “Bowls of Stars” - Save the dragon! Solve the mystery of the alien 'grubs' and illnesses and role-play with some kobolds and others to get the halves of a sphere. The somewhat body-horror 'grubs' may be deleted/tweaked. I did receive a message that this scenario was run by a father for his kids with some tweaks to the role-playing aspects.

OPD 2017 - “You have acquired the deed to a ruined tower...” A mostly open hexcrawl involving uprooting a bunch of drunk halflings from a tower that you "own," as well as bunch of oddball local factions, including a leaderless cult, vegetarian orcs, and goblins with a hot-air balloon....

OPD 2018 – “The Dragon's Lantern” 0-level funnel – Hapless PCs are sent on mission by dragon to retrieve an artifact among a ratling warren.

Drokki's Tomb –  Reverses trope by 'returning' something to a tomb. Low combat, mostly negotiating a few puzzles and traps. Beware the Hammer Calliope...

Malleth's Cave – A small complex with multiple locations: There are possibilities to role-play/negotiate truce between two groups of quarreling goblins. Two side-areas include interesting 'toy soldiers' and a mean badger. Players attempting to retreat/rest at the abandoned farmhouse will find it haunted by a harmless but insistent ghost.

Nemar's Truancy – Convince a wayward prince to return home (or not) and come up with non-lethal ways to deal with his pet bear. One of four adventures built around Dyson's "Grizzly Eye Cavern"(some may also find "Trakhor's Bath" amusing - involves fighting a naked ogre armed with a wet towel)

Be safe and healthy out there, folks. 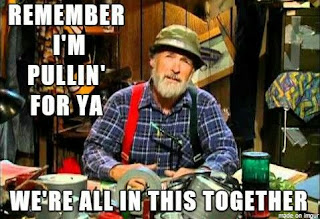