Time for another goofy character class, because I've been reading history, and why not? 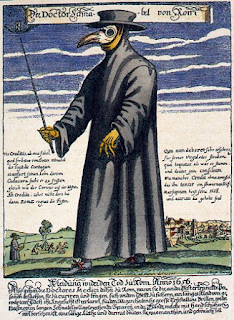 Plague doctors 'treated' victims of the bubonic plague in medieval Europe. Well, treat may be a strong word - more like attempt ineffective cures, and mostly keep an accurate account of the dying.... They were hired by the cities and municipal authorities, and were charged to treat everyone, regardless of their station in life. 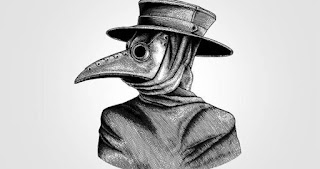 But there's that whole mask thing... The raven-like close-fitter mask with aromatic herbs filling the "beak." Believed to protect the wearer from bad humours, and airborne "miasma," the iconic mask did little more than subdue the smell of disease and death, and give its wearer their intimidating appearance.  Exposed to disease, famine, and other maladies, plague doctors succumbed to the disease at similar rates as their "patients."

So why would you want to play one of these medical quacks? Maybe you need to shill some snake oil, move with impunity through quarantines, or even effect a real cure now and then.  Whatever the case, strap on that mask, don your coat and hat, and go cure some plague!


And, because I've been playing The Black Hack with Matt Jackson and few other miscreants - have a custom class for that grotty system (review upcoming!).

And here, have some Mono, Inc. to get you in the mood for rocking your bad Plague Doc self.


Edit: Per a couple of comments, this class could be folded into a low fantasy or 'no cleric' environment.  Using the OSR variant, perhaps lend them the healing kit from the BH version.  Or even play up the charlatan aspect, and let the player choose one thief skill. Have fun!