A brief posting inspired by the Bogeyman's Cave - creating a dungeon of approximately 10 features in a 30-minute time limit.  Elements were to include:

So here we go - a list of areas/features created in 30 minutes, scrawled in a notebook, followed by a very rough line-and-arrow conceptual map of the listed spaces and critter locations:

Hook/background: A temple and tome is rumored to contain a piece of a star.  Worshipers used to attend to it, but the place has an accursed aura since a necromancer was interred there.  Guardians magical and undead occupy the space.

Pool (NPC) – Is occupied by a bored nereid (save vs charm, etc. or be stuck telling her stories until you starve).  She may be cajoled and bribed to provide what info she knows about the tomb.  Her knowledge is limited, other than that a magic trap guards the temple, and that the wight has hidden himself.  With a high reaction roll/success, she will provide a water-smoothed stone from the pond, assuring that it will protect the party.

Trap 1 – A pair of columns flank the entrance.  Crossing between them will break a magic ‘beam’ causing them to crash together (2d8 damage).  Unless one is carrying the nereid’s pretty rock.

Combat 2 – Behind a secret door is a chamber of the true tomb: Undead guardians commanded by the big-bad protect the true tomb (6 skeletal champions or equivalent (2HD, disadvantage on turning)

Weird – A levitating, spinning stone occupies the center of the temple space.  The stone can not be disturbed or interfered with.  A dispel magic or equivalent will remove its levitation.  The stone is a meteor (50lbs), and of value to those who craft meteoric iron.

Empty 1 – An entry foyer past the columns is capped by a transparent dome, bathing the area in fabulous, golden light, even at night.

Empty 2 – A vault of grave goods – long since despoiled and raided.

Empty 3 – A false tomb, meant to lure and distract those from the real tomb.  “treasure” consists of empty chests and cheaply gilded items.

Magic Item - The wight wields a scepter (as +1 mace).  The scepter may be used to command undead once per day, and contains 1d3 necromancer spells (3d4 total charges).  Each spell cast from the scepter requires a save vs spells or lose one point of CHA from the “stench of death” 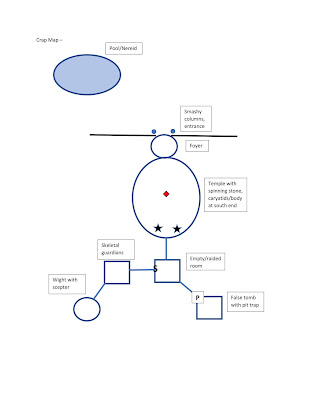