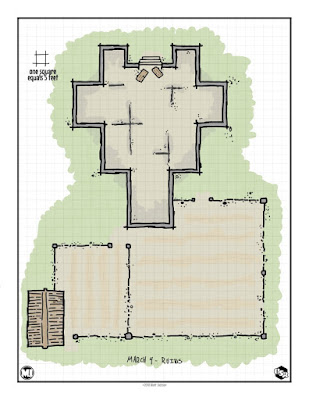 The Berthou family homesteaded next to the old temple, building their corral against the structure's stout walls.  They would not think of defiling the interior space, but the cleared land of the abandoned place was too much a temptation for a freedman trying to get his start.

All was well until the screams started.

Of course, the cow ran off.  The ox didn't but he is half-deaf anyhow.

Now the Berthous are in desperate straits. Any pitiful seed money they had is gone, and the crops have not yet grown. The screams come and go from the temple. They swear that they did not disturb any artifacts of the place, nor did they turn up a grave in their building and tilling...

Would someone brave and perhaps even pious seek the cause of the screams?

The interior of the temple is razed from some past raid, its interior walls burned and collapsed. Light streams through multiple holes in the roof. Nothing stirs here but a nest of roof spiders in the rafters, preying on pigeons...

Then the ghost swoops in - screaming and raging.  It does not attack - and a perceptive character will note that it is ignoring the explorers, and appears to be casting about aimlessly, ghostly hands pulling at incorporeal hair.

For buried in the floor of the southwest 'room' is an urn of ashes, those of the departed bishop who now haunts this place. A bit of disturbed soil may hint at this item. Anyone who finds and exposes the urn will suddenly be engulfed by the ghost, much to their horror.

After the initial shock, the ghost will be seen to calm itself and a faint voice will introduce itself as Padre Domerigo. He is grateful for the recovery of his urn, and asks to be returned to his birthplace some weeks' journey away. Even in his form, the characters will find the ghost an agreeable, even jovial, travelling companion, knowledgeable of the local area.

Although there is always the risk of a negative reaction from those sensitive to the incorporeal.