The Milduitic are found impassively guarding remote desert tombs and temples in honor of various insectoid gods and godlets.  Created for, and tasked with, this role, they are above bribery and will resolutely defend their responsibility with force of arms. Additionally, their mysterious creators took certain precautions in making reliable guards, and the Milduitic are immune to charm spells, and save vs. sleep at +2.

Milduitic appear as burly humanoids, with yellowish skin the color of aged bruises and lustrous black carapace-skulls. They speak in a high-pitched chittering, clicking language of their own. The language is partially beyond human hearing range, and they may appear silent, in spite of communicating with one another, or attempting to communicate with trespassers. 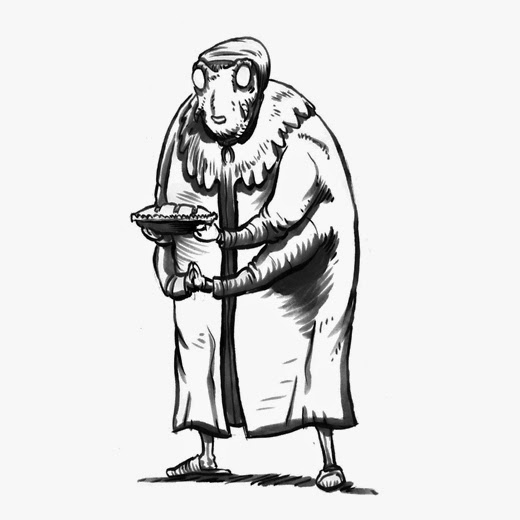 Taartkin are skittering, mincing servitors to those dark forces that halflings fear most - those of the fallen cakes and filched pies.  Prowling in the bushes near the burrow-holds, the Taartkin use foul powers granted by these dark forces to make bread rise unevenly, to cause cakes to fall at critical moments, and to ruin the crusts of pies. Halfling hearth-priests keep a sharp eye out for the glowing eyes of these nocturnal, four-armed lurkers, who swipe baked offerings for submission to their own gods, as they do not bake any goods of their own.
(This minion was an inadvertent duplicate entry, but will possibly show up revised and with a different illustration) 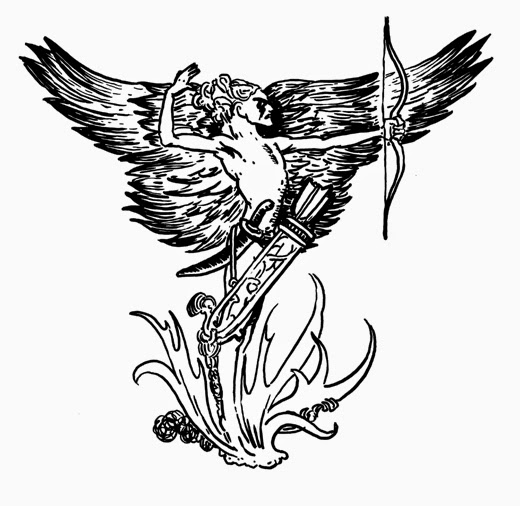 Dark-eyed winged enforcer of the fire plane and associated Deities, Vedelris is dispatched to exact retribution, collect debts, and confirm that rites and sacrifices are being properly followed. Appearing as a slight, winged man of serious demeanor, Vedelris will burst forth, ringed in flame. His initial appearance will have equivalent fear effect for those who do not save vs. spells.  Often, his appearance alone will have sufficient effect on the malleable minds of worshippers. If he finds the situation not meeting his criteria, or he is met with resistance, he may lay forth with his bow, firing flame-wreathed arrows. Any creatures closing within 10 feet will receive 1d6 fire damage per round.  As a fire-based creature, Vedelris is immune to fire-based attacks and non-magical weapons. "Killing" him will dispel him back to his native plane.
(this fellow is for a lightning round allowing multiple entries for a single illustration)
Posted by Vance A at 17:32