One more prompt from the OSR Discord "Secret Jackalope 2022" writing prompts (Round 2 assignments). This time, "Nonstandard creatures with useful bits and how to harvest them" via user @wyattwashere.

Well, OK. I guess I'll delve back to the lunacy that is the 1981 Fiend Folio and pull up a few uncommon (and at least one better-known) critters and make up some stuff.

The harvested organs and products are each one element in the creation of their respective products, and other undetermined ingredients or reagents will be required....

The Adherer - The adherer is a creature resembling a mummy, but is not an undead. Instead, it secretes a “resinous solvent” that causes any weapons to stick to it until the creature is slain. Fortunately, it is susceptible to fire, and boiling water, in sufficient quantities, can break the adhesive's grip. The adhesion breaks down 5-10 turns after the creature's death. 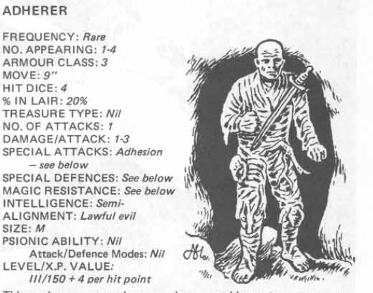 Product: Although the excretions from this creature have been rumored to be ingredients for sovereign glue or universal solvent, wise practitioners of the alchemical arts know that this is folly. However, the “glue” has been incorporated into another reagent to help deal with more ghostly foes:

Spirit Gum: An application of this viscous fluid will cause an incorporeal foe to become semi-corporeal for 2d4 rounds, allowing them to take half-damage from non-magical weapons during that period.

Adhesive from two adherers is required to create one use of spirit gum. The adhesive must be collected immediately upon the adherer's death by dissolving the adhesive in four gallons of hot water. The water is then distilled off to provide raw material for creation of the gum.

Crypt Thing – This is a moderately powerful undead whose primary defense/effect is to teleport its foes to a random location (100-1000 feet distant, or up/down one dungeon level). 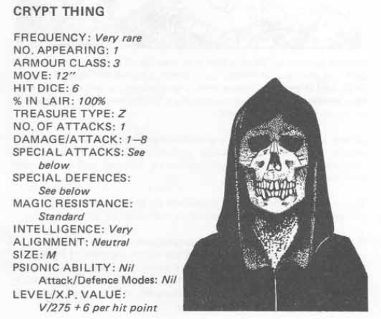 Product: Arcane research has determined that this ability lies within the shriveled pituitary of the creature, nestled at the base of its mummified brain. Upon slaying one of these challenging undead, a knowledgeable individual may be able to identify and remove the gland with a magical weapon.

These may be used to create a Wand of Teleportation at half the time and expense. However, because of the corruptions inherent within the crypt thing's preservation and reanimation, there is a 2 in 20 chance that use of the item will send the user in a random direction consistent with the crypt thing's inherent abilities (table from FF, below). 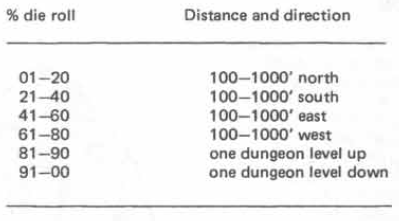 Disenchanter – This aggravating creature's ability is magic drain, as it "feeds" on magical energy, attacking enchanted items and sucking out the magic through its extensible snout. 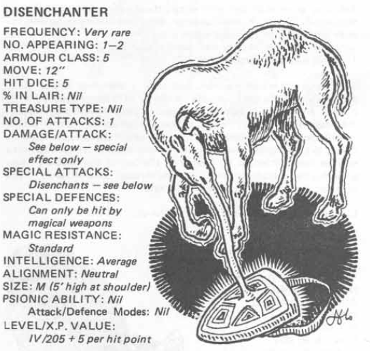 Product: The capacitor-like organ where a disenchanter "digests" enchantments resembles a stomach, but is packed with filaments capable of absorbing arcane energies. From this organ, an expert biomancer may create one of two devices.

Quidor's Bag of Spells: The “stomach” is preserved in such a fashion as to capture and hold a spell cast by an opposing spellcaster. The defending caster must declare use of the artifact prior to the spell-casting. On a successful saving throw vs spells (adjusted for the user's INT bonus), the Bag's residual qualities intercept and capture the spell, negating its effect. One Bag of Spells can hold 1d3 spells of up to 3rd level. The spells are temporarily preserved and may be selected and used within 2d6 turns before dissipating into the aether.

Oshan's Vessel of Arcane Capture: This bag crafted from the tanned gut-organ allows a defending caster to capture up to five levels worth of spell energy. On a successful saving throw vs spells (adjusted for the user's INT bonus), the bag dissipates the caster's spell and contains the arcane energies within. The stored energy may be used to cast additional “copies” of any memorized spells up to the total captured spell levels. The bag will allow a user to re-cast a spell already spent for the day in a successful spells saving throw.

Flail Snail – Sure - Let's do this. In the original description, the creature's shell is noted to provide some magical resistance "acting as a type of robe of scintillating colors." Although the listed effects in the creature description don't align with the robe's described powers. But the listing does mention that the shell has value to arcane users, so there. 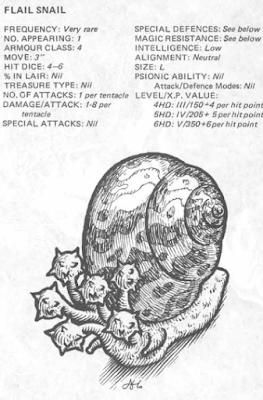 Product: Once the snail is slain, the shell may be separated from the snail's body for transport to a potential buyer. Only an unmarred shell is usable, as cracks, holes, and other significant damage will disperse any residual qualities as a magical component. During removal, there is a 1 in 20 chance that each individual remaining flail may retain some nervous system stimuli and reflexively strike as the shell is removed.

As a component for a Robe of Scintillating Colors, the shell must be sawed apart with a diamond-edged saw into prism-like shapes, which are then stitched to the inside of the robe with any number of rare and enchanted threads. The shell-prisms, along with other rare and valuable components, are built into the robe, which is then crafted by an illusionist of sufficient level to create magic items. These prisms act as the foci and "lenses" for creation of the hallucinatory patterns that give the robe its name.

Robe of Scintillating Colors: (translated from the Gygaxian description in the 1e DMG): The user is required to have an Intelligence of 15 and Wisdom of 13 to be able to use this robe, which will display an array of flowing, hypnotic colors when activated. Anyone within a 20’ radius must save vs. magic or be transfixed for 1d4+1 rounds. After the initial period has passed, the attacker will need to make another saving throw to attack the wearer. Additionally, each round the robe is "flowing," attacks (both missile and melee) are made at an incremental -1, to a maximum of -5. After the first round, as long as the wearer doesn’t move more than 1”, they can act normally, e.g., cast spells. If activated in a non-combat situation, targeted creatures will be hypnotized for 1d4+1 turns if they fail their saving throw.

Sussurus – I saw this thing originally in the classic White Dwarf #9 adventure, The Lichway. I also expanded my vocabulary minimally by learning the definitions of the words "sussurus" and "bull-roarer." Anyway... It's a weird beast that through its "dronesong" (respiration) can put the undead to sleep. 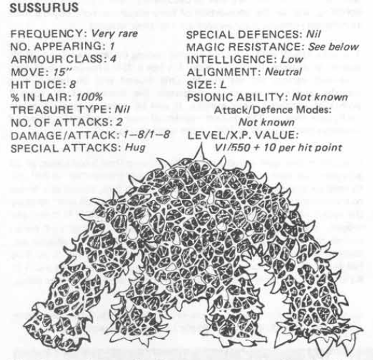 Product: The sussurrus must be carefully sawed apart to expose its respiratory core-organs. The organs are difficult to discern from the complex honeycombed structure of the creature, requiring a successful intelligence test (penalized by -4) to identify and remove them without damage. One creature will supply sufficient organ-structure to create 1d3 whistles.

Volt - A flying bit of nastiness, with a bite/affix attack followed by 2d6 electrical damage per round until detached/slain. Just in case stirges have become a bit too mundane. 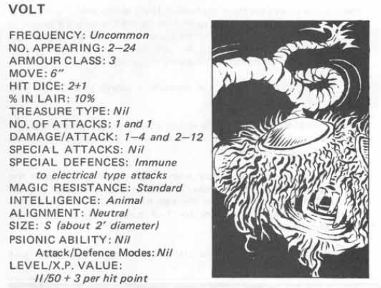 Product: Remove the capacitor-like organ at the base of their spine within 1d6 rounds of death. The harvester must wear protective gloves and use a non-conductive blade (ex. glass) to avoid taking any residual damage (2-12 hp) from the organ. The organs must then be transported individually in non-conductive containers. Organs must not be allowed to touch, or they will arc and explode for xd6 damage (x=number of organs). Organs from four volts may be incorporated into creating magic weapons with supplemental electrical damage (+1d6 damage) or a twelve of the creatures may be required to provide electrical energies to aid in the enchantment of a Wand of Lightning Bolts.

I'm just going to include this illustration, because Erol Otus:

Yellow Musk Creeper – A lovely predatory plant, and the next-to-the-last critter in the Folio (followed by its "progeny" the Zombie, Yellow Musk). Its flowers hypnotize a victim to draw it into the mass of the plant, where the unfortunate then has their brains sucked out by aerial roots. Multiple roots will attack a victim, making rescue and extraction particularly difficult. Dungeon Roundup(tm) is highly recommended. 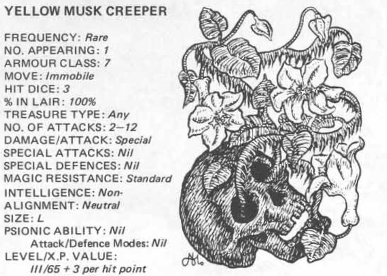 Product: Like the black lotus, the flower of this predatory plant is valued for its mind-altering qualities. In this case, it is for the deleterious effects of the flowers and buds. Qualified vivimancers may distill a potion of feeblemind from the flowers and buds of the plant. Each draught of potion requires eight of the blossoms and four of the buds. The blossoms must be collected from a still-living plant for maximum efficacy (otherwise twice the number are required) and immediately preserved within a pure distilled spirit of highest quality to begin the extraction process.

Alternatively, the extract may be sprayed directly in a victim's face. An unsuccessful save vs poison will cause the victim to lose the memory of the last 24 hours, and lose 1d4 Intelligence points for one day.

Any vivisectionist worth their salt knows that the dragon's hide isn't where the money is. Scales? Bah. That's for amateurs.

But the esophagus? That's where the magic is. Each dragon's esophagus is specifically evolved to expel its specific breath weapon, without wear or damage. Of course, the esophageal tissues are much more limited in volume than the hide, with the available tissue limited to the length between the creature's mouth and the expectorator gland of each particular dragon. The available length varies, with the shortest being among the black dragons, where the acid glands are little more than evolved salivary glands, to the longest among the blue dragons, to allow for the internal volume of the galvanic glands.

Need a pouch to transport your pet grey ooze? Black dragon. How about that biomancer's hood for surviving a toxic atmosphere? Green Dragon. Stitching up some Gloves of Lightning-Throwing? Blue, of course. And that snazzy jacket to go meet your Infernal Patron in comfort? Better have enough red dragon internal parts on hand.

I forgot to add this in my original post, but while researching this post, I took a look at some info on "traditional" medicine for potential inspiration. It wasn't particularly inspiring, and it just made me sad.

So here are a couple of charities dedicated to the protection of animals from poaching and trafficking.

International Fund for Animal Welfare: dedicated to protection of wildlife from commercial exploitation and habitat protection.

savepangolins.org because pangolins are heavily trafficked and an underappreciated cool critter. 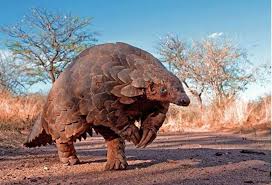