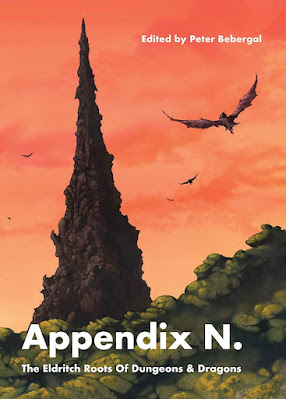 As I mentioned, I purchased the hardback edition, which was shipped with a bonus booklet ("People of the Pit," by A. Merritt). The mass-market version comes in trade paperback and doesn't include the A. Merritt story.

The book is a collection of short stories by primarily Appendix N authors. Peter Bebergal wanted to create a collection freestanding short stories, and didn’t want to include novel excerpts. Because of this editorial decision, some authors were not available or available works were cost prohibitive to license for a small press publisher. Partly due to this, Bebergal took some liberties on Appendix N references, including stories from writers in Moldvay's "Inspirational Source Material" list (page scan below), as well as a couple of non-Appendix N authors who were contemporaries of the listed authors.

Here is an interview with Jon Peterson where he discusses his selection process. 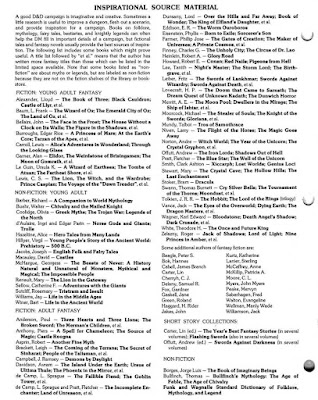 Overall, the book is a good anthology and survey of inspirational authors to the early game developers and players. Some stories were familiar pieces (Ex. "Tower of the Elephant"), but several were new-to-me authors and stories. As an anthology, the book provides a taste of the writers' styles and settings, and will likely kick off further research and reading.

Brief intros of the individual stories by Bebergal would have been useful for perspective or the editor’s selection rationale. At least I would have appreciated a more rigorous explanation in the introduction, which is only a few pages, and only offers a couple of paragraphs to the selection process.

And as it says on the tin, "Eldritch Roots" - the collection does highlight some of the weird fiction, pulp, and vaguely-defined genre fiction that is typical of the vintage of the stories. And while the influences on the game may be there, the game mechanics really don't reflect the weirdness of the source material, such as Vance's descriptions of spells as living formulae biding time in the mage's head, or the creeping, just off-screen horrors of Lovecraft. More likely, although bits influenced the game design, the stories more likely influenced the implied or described settings of the designers and players.

Either way, a fun read. 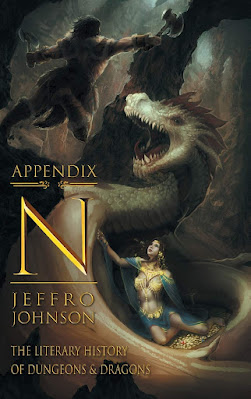 Jeffro Johnson's book is a collection of essays originally published on his blog.

The Good – There is passion, and a reasonably deep dive through each listed book. The author knows the books well, and the essay content is best when diving into hows and whys of style and influence.

The Not Good - The collection is a direct publication of the author's blog articles, with no significant content or typo editing. References that would have been hyperlinked on line are lost in that they don’t include URLs. Fortunately, many of the referenced bloggers have been on my reading list at one time or another, but readers outside of my particular demographic may not be familiar to some.

The overarching subtext of the essays, though, is that the original authors and books were 'cancelled' rather than forgotten. This will likely put off readers who don't share the same worldview, or those looking to use these essays primarily as an introduction to the stories. Because of this, the content is very inconsistent on discussing how the authors/stories may have influenced the game, tending towards tangents on politics and religion that detract from the value of the delve into the works. The language and attitude is off-putting to a reader more interested in the content of the App N books than a digression into cultural criticism and hackneyed political correctness themes. Judging from the language, it is clear that the author is writing to an audience that shares these views.

If one would want to keep these stories "alive," and get a new audience inspired to discover these works, it may be best to focus the enthusiasm upon the qualities of the writing and storytelling, rather then grousing about "the way things were." If you want to say the stories are more than the products of the time, don't use language or attitudes of that time.

What both books do, at least for a reader like myself, is to inspire a search out new-to-me authors and stories. Many of these works are still in print, an indication of their resiliency as literature. Those that aren't readily found in new dead-tree versions may be located via used sources, scans, and audiobooks. For public domain pieces, look to resources like Project Gutenberg, Librivox, or arthouse reprints.

As mentioned above, one perk of pre-ordering the Bebergal hardcover was the inclusion of an A. Merritt story, "People of the Pit" as a separate chapbook. Merritt was an editor and author during the early 1900s through the 1930's and was, in turn, influential on pulp authors such as Lovecraft and others with his lush (or florid) descriptions and hidden world adventures. This inspired me to pick up a republished edition of The Moon Pool, his best-known novel. And I found it to be a good read, able to hold its own as a strong story with interesting worldbuilding and characters. So, Bebergal brought me to a new author, one who I'll likely pick up more stories from (as well as introducing me to the art of Vigil Finlay).

And if one wants another option for an enthusiastic survey of the Appendix N books and authors (as well as their contemporaries in genre fiction), I'd recommend The Appendix N Book Club podcast for their lively discussions of the literature and ruminations on how the stories influenced, or can influence, gaming. They have since moved beyond the original list, but maintain a good program of genre explorations.

"Appendix N" is a concept beyond the original 1e DMG. Inspirations change or fall out of favor, and at this point in time, both genre writing and D&D (and other RPGs) seem to be more self-inspirational, than specifically referential to prior works. Add to that, we have an additional 50 years of publishing, movies, and popular culture to harvest ideas and inspiration from, both for game play and game mechanics.

And as to writers falling in and out of favor, genre authors have been grousing about changes in reader tastes and publishing trends for years:

"Old-fashioned novels which now seem stilted and artificial to the point of burlesque did not appear that way to the people who first read them. Writers like Fielding and Smollett could seem realistic in the modern sense because they dealt largely with uninhibited characters, many of whom were about two jumps ahead of the police, but Jane Austen’s chronicles of highly inhibited people against a background of rural gentility seem real enough psychologically. There is plenty of that kind of social and emotional hypocrisy around today. Add to it a liberal dose of intellectual pretentiousness and you get the tone of the book page in your daily paper and the earnest and fatuous atmosphere breathed by discussion groups in little clubs. These are the people who make best sellers, which are promotional jobs based on a sort of indirect snob appeal, carefully escorted by the trained seals of the critical fraternity, and lovingly tended and watered by certain much too powerful pressure groups whose business is selling books, although they would like you to think they are fostering culture."