It's a A Very Wyvern Thanksgiving, Halfling Brown (plus a bonus review of The Crimson Monastery by Dawnfist Games).

Fine. Kill my monster. At least Goober didn't get a chance to overshadow Jax, as often happens.

The party checked for gut-treasure and explored the cave, recovering a modest amount of treasure. They butchered the wyvern and hauled their spoils back to town.

The wyvern (and much locally-donated food) was prepared for a town feast at the inn. Much merriment occurred.

No big mission or mysteries here. But some excellent planning on the party's part. After all, there is no such things as a fair fight. A brief scenario, but everyone got to grab a role, and roll at least once when the wyvern emerged. As noted above, I took the opportunity to have the players do a bit of character exploration and interaction with the local world before and after the skirmish.

Oh, the wyvern wasn't off-the-shelf, but borrowed from The Crimson Monastery, by Dawnfist Games.

The scenario is a system-neutral mini hexcrawl involving a bunch of zealots arriving in a small town and harassing the locals. The adventure is appropriate for a low-level party that doesn't mind the potential for some replacement characters... 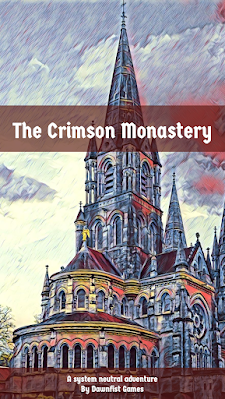 The adventure is designed for a few sessions of play, and includes a 'timer' for driving events to occur after 1+ days of in-game play (zealot actions, other NPCs, etc.). Outside of town, there is the zealots' lair, a flooded tomb of cursed heroes, and the above wyvern's cave. The scenario also includes a list of rumors and other interactions to encourage the players to take actions.

While dealing with the zealots is the main objective (by violent or non-violent means), the side adventures grow the 'world' of the valley setting and potentially provide resources or information regarding the scenario.

Writing is brief but detailed enough to provide flavor and a sense of environment. Text layout makes good use of bullet points and bolding to highlight information, similar to Necrotic Gnome's adventure layout. The module clocks in at about 30 pages in booklet format.

The "monsters" are statted out for a TTRPG named "Adventurous" (no link available Update, the author let me know that the rules are currently submitted to DTRPG and should be live shortly) but described well enough for easy conversion (the author mentions OSE or Knave as example systems). The author gives each monster type (whether goblins, zealots, or the wyvern) sufficient description for easy conversion, plus flavored abilities, selectable by a d6 roll. I ganked the wyvern, adjusted it for OSE, and kept the alternative attacks, which included a shriek (fear) attack and multiple venomous claws (instead of the tail stinger). The monsters/NPCs with alternative abilities is a strength of the module, and provide enough flavor and surprise for players to keep them on their toes.

Likewise, there are several excellent magic items, similarly flavored and themed, and much better than the generic +1 sword. The monsters and items are my favorite parts of the adventure, and the most likely bits to be reused elsewhere. Speaking of, a local trader has a number of magic items for sale. Since magic for sale isn't a typical bit of B/X I'll either strike this or scatter the items in the forest (or somewhere) if appropriate.

That said, the adventure provides a good framework for a couple of sessions, and there's a good chance that my merry bunch of mushroom harvesters will stumble into this milieu.

The author also has a second adventure, The Serpent Cult, a similar, smaller adventure, with the same design style and philosophy.

I recommend grabbing one or both, either to run, or to mine for inspiration. As small scenarios, they can readily drop into a hexcrawl or similar open world. Enjoy!