Passing through the Hamlet of Griswall

I finally took the time to transcribe a bunch of scribbles into legible text on the laptop, so filling in some blanks on the map, so to speak. Had some time, as I've been taking a burnout break away from work, and waiting the start a new gig next month, hopefully in a different, possibly better, work environment.

Creative souls are posting up on reddit, and user u/therealregalis provided this map: 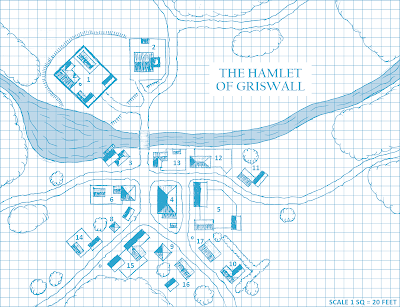 with the following note:

Decided to make a map deliberately in the style of TSR modules like N1 and T1. Quick outline of the map key:

Ok, good. I typically use the Hommlet text format for my town descriptors, and I'll stick with therealregalis' building/occupant distribution for this writeup.

So a raison d'etre for this little burg. A crossroads should be an obvious point to establish a town, preferably a successful one at that. But Griswall, at least in this snapshot, is pretty small (I've populated it with around 60 folks).

Serendipitously, I've been listening to some history bits (among other things) while taking the dogs on long walks, and picked through a couple of programs on the English War of the Roses. One of the bloodiest battles was the Battle of Towton, involving 50,000 troops of the Lancastrian and Yorkist sides, and taking place in marshy land on a snowy spring day. At the end of the day, up to 9,000 lay dead, most as the Lancastrians fled a rout. Many troops attempted to flee across rivers and were either drowned or shot down until the channels were choked with bodies. Bodies were buried where thy lay, or in unmarked mass graves.

Ok, on that pleasant note, Griswall is built on a site of a similar battle that took place some time in the past. Like Towton, bodies were buried or consumed by the land, and even the notable dead became anonymous. Unlike Towton (probably), occasionally a few of them will arise to walk around. So who would settle a haunted place as this and think it a good opportunity? Retired adventurers, of course. Several of the town's notables are old comrades-in-arms, and fending off the occasional restless dead is a small price for some good real estate, and no longer involves poking around in some dank dungeon somewhere.

So anyway, feel free to pay a visit to the Hamlet of Griswall, have some buckwheat biscuits at the inn, and perhaps cajole a joke out of Degrir Oakenvier.