Currently having the mixed blessing of the inadvertent adventure of cancelled flights due to a combination of the plague and two atmospheric rivers gut-punching the West Coast.

Thankfully, I'm visiting family, so much better off than the poor souls stuck at airports or hotels. And I have a notebook and the interwebs.

So I cobbled together a quick and dirty solo adventure of random rolls using OSE as a framework.

Initially I grabbed a PC from a random character generator - yielding a cleric with above average WIS and CHA and equipped with plate and shield. Solid start. I bumped our hero to 2nd level for a spell, and gave him two Meatshields extras.

I could have found a procedural dungeon generator, but went bare-bones with a simple d6 roll:

When a room was rolled, it got the B/X random stocking roll:

Encounters were d6 for surprise plus 2d6 for reaction. Combat was loosely based on Kevin Crawford's Solo Heroes. Successful monster attacks caused 1 point of damage, and heroes/hirelings caused 1hd damage (e.g. a 2HD monster required 2 hits to go down).

How did it go? 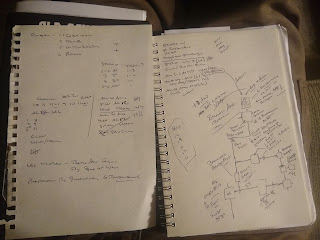 The party entered the dungeon, finding an empty room with two exits. They went east, hitting a intersection and moving north. Kicking down a door, they found a room occupied by 6 orcs. 2d6 said they were indifferent to the party. So perhaps taking shelter or exploring on their own. The cleric asked if the party could pass, but we're refused (low reaction). The party bowed out and returned to the corridor, moving east.

They found a third room. This time occupied by a giant gecko. Combat ensued and the gecko slain. No treasure.

Continuing east, they cleared another door with an empty room beyond. Of three exits, the party continued north finding another empty room. Checking out the corridor to the east, they happened on a room filled with brown mold. Even the glint of potential treasure did not pique their interest...

North to another room, where they were rewarded with a bag of 300 sp and 60gp. Now west, they ran into three wandering gnomes. Who weren't happy little lawn gnomes. Slaying one, the remainder fled to another room, where they were reinforced by three more including a leader. Again, battle ensued, with the leader injured and two more put down. The buggers again fled like the little cowards they are...

But they dropped more silver and gold, and the leader ditched some jewelry in hopes of dissuading the party. Satisfied with this, the party didn't pursue.

Another couple of intersections (d6 rolls indicated that the party found no gnome trace). The adventurers entered another room. Monster roll. D6 said they caught the gnomes. The last standing surrendered.

Now, did he have info? 2 in 6 said yes, and a random rumor generator said that the gnomes were seeking a relic battle-axe, but he didn't know exactly where.

Gnome in tow, the party went north, immediately finding a door and room. Again, monster rolled. 1 in 6 that they were guarding the axe. Yes. Rolled 6 berserkers (1hd, but bonus to hit). A fierce battle ensued and my hero's mooks went down. The cleric cast darkness upon the room and booked it. The berserkers pursued, catching the plate-clad cleric. He dumped silver as he clomped down the hall until the coin outweighed the need for blood.

Back to town, recover, and hire new friends. A first level mage and two more mooks.

Back to the dungeon. Entering the first room, the party came upon the orcs. This time, they weren't as charitable, and a fight broke out. After doing in half of the orcs, the remainder fled.

The party picked up some silver and gold from the dead, but didn't pursue. They were on a mission...

Marching straight to the axe room, a listen at doors revealed that the berserkers we're still present. A failed attempt at door kicking tipped them off, and the brawl began.

The mage attempted to spook them with ventriloquism cast on the alter where the axe lay, but to no avail (berserker morale is 12). The toe to toe melee ground on, with a Mook (2hp) falling, but the remaining cleric and hireling wore down the berserkers. The axe was theirs.

Per Donjon the axe became a +2 dwarven war axe, capable of casting lightning (2d6 dmg) once per day.

Well, that was a fun little diversion.

Off to check weather conditions. Hope you all had happy holidays and let's look forward to a promising 2022.