So I attended our revived local con, Dragonflight, after a year's hiatus due to <REDACTED>. I signed up for a few games, but felt the offerings were thin in the RPG front (due, in part to the absence of organized play supported by the current editions of the game).

Nothing else to do but step up and run a game. I set up a 3-hour window on Sunday morning running my B/X-OSE dungeon-crawl Vobleavira Haven. It's been a while since I looked at the adventure, so I reviewed it, and decided to tweak the adventure for the game - adding a few details, and creating a bit more story to make the adventure less of a "wander around and steal stuff."

First of all, apparently adding this: 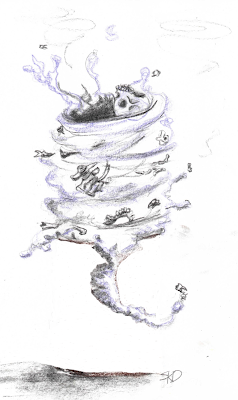 ... is becoming a recurring theme via another recent adventure....

Besides, it was a Halloween game. Gotta have something spooky.

On the morning of the game, I found I had a full table of five. Two familiar faces from our on and off local campaign, as well as three additional folks: another grognard, his daughter, and her husband. The last two had a passing familiarity with 5e, but hadn't stepped into an older edition game before. A quick primer on what to expect, and we were off...

With a reasonably balanced party of 2nd level cleric, fighter, elf, thief, and halfling, the band stepped through the doors.

They took some goblin guards by surprise, slaying two, and allowing the third to flee with a cookpot, bit of trash, and his pet racing cockroach. After some exploration, the party discovered one of the several bypass tunnels, emerging into a funerary room filled with tools and embalming materials. As one party member 'knew' that a necromancer now occupied the space (via the rumor table), this could be evidence of nefarious deeds. As was a random encounter with six skeletons immediately after (I just do what the dice tell me).

The skeletons beaten down, the party explored some corridors, avoiding a suspicious sloped corridor. Somewhere around here, they heard suspicious, pained moaning. After cautiously listening at a few doors (The thief couldn't hear anything to save his life, but was certain that rooms were empty.), they soon found the compound's crypt, and after a brief discussion decided to leave it be. Because ghosts, and necromancer.

Bypassing a crossbow trap, the party found a recently ransacked barracks with a smoldering fire.  Tracking back into new corridors, the party surprised a rival party of hobgoblins and goblins (this time actually heard by the thief). With the 18 Strength fighter (yes, randomly rolled) kicking open the door, the elf burst in, yelling "Surrender!" in hobgoblin. I rolled a reaction of 11.

The humanoids looked up from their conversation and basically said, "Yeah, this place is yours. We're outta here. A ghost made of smoke and bones essentially ate one of our guys, we were laying low until it left." The hobgoblins gave general directions to a couple of features, and with that, they dropped a bag of loot and skedaddled. The party got some bling, a scroll and a couple of potions with no sweat.

One area mentioned was the cleric's quarters. Armed with this info, and a couple more of the rumors, the party worked their way west in the general direction indicated by the goblinoids. Discovering a door ajar, they burst in upon an 'evil cleric' and his acolytes. After brief shouting match, and some back-and-forth about "heretics!" battle was closed. The party was fortunately able to prevent the big-bad from casting, and defeated the band without significant harm.

This was indeed Pere Kochi's quarters, and a thorough search found his journals and a few valuables. The journal entries told of his efforts to communicate with the deceased St. Balkin, as well as his hesitancy of using certain books recovered from Chaos forces in this pursuit. The final entry mentioned a rough reanimation of St. Balkin's bones, and intent to study further. Of course, Kochi never returned from campaign.

Of great interest were several arcane/divine sigils on the floor. The party, continuing with their caution (because necromancy) studied them. A strong roll by the cleric indicated that these sigils were generally beneficial. And players being players, they hopped into random sigils. They received some modest boons, and the thief now has an undead weasel familiar.

The party soon found a hidden library containing necromantic texts, as well as an empty reliquary. Suspecting that it belonged to the remains of St. Balkin, they collected it and continued their explorations.

Rumors again served them well, and a flooding room trap was avoided (The DM may have telegraphed the hazard slightly...).

Tracking back, the group decided that the crypt may be a good place to hunt a ghost (at 2.5 hours into a 3 hour session, the DM decided that it was a perfect place for a wandering ghost).

Cracking the door open, the thief tossed in his familiar. Hey, it's undead, it will blend in. Unfortunately the familiar was mostly blind, but smelled death and rot, and heard shufflings. More door kicking commenced, and the party was confronted by three armored skeletons, followed by our friend the unfortunate St. Balkin, see above (the illustration was well-received by the players...).

With a bout of turnings, and going toe-to-toe with the ghost, the bones finally lay rattling on the floor. Taking a clue from the journal, the remains were re-interred into the reliquary (if they didn't have it, the ghost would have regenerated). The remaining dead returned to their catacombs, peaceful.

So yes, a good session and play-through. The scenario ended up with a good mix of exploration and combat, playing smart and backing off until they had resources and information. Rumors were recalled multiple times (of the five, three had at least some truth) and used for exploration and caution. Although there were injuries, only one or two characters ended up significantly low on health. As far as exploration, about 11 out of 24 rooms were opened. The party avoided several significant traps, and didn't find the thief's quarters and its treasures, nor a temple space (which would have had a summoning circle as a clue). Another session, and the majority of the compound would have been opened.

So it felt good - I hadn't run a session in officially forever, so getting on the back side of the screen carried a bit of anxiety. Of course, once the party started kicking doors, such feelings dissipated, and things moved pretty well. I was able to go fast and loose with rolls and rules, as needed. I realize I missed a few details, but I don't feel it would have broken anything. Time to get to running a few more...

And yes, this means the Vobleavira Rev 2 will be in the works. Stay tuned.  **Edit - newest, bestest version now live!