So a bit ago I entered the Prince of Nothing's No Artpunk Contest with a cobbled-together adventure using Jackson's "The Long Hall" map. 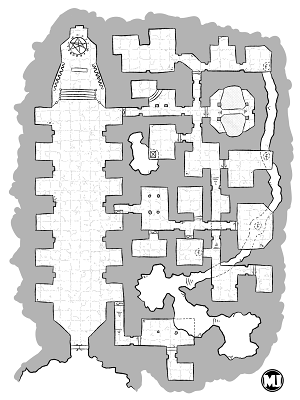 And, well, it sucked. No two ways about it. That said, I got some valuable constructive criticism in the judging.

So nothing to do but take it home and rework.

(insert stock footage of typing away in the garret)

Added some more story to the place, a few more NPCs, tweaked the baddies. Shifted a few things around to help the flow of the adventure. And dumped in more treasure (although the Bag of Holding hit the cutting room floor). So perhaps it sucks less now...

And now it's live, again, on itch.io. So have a look, see if it's improved, and enjoy your visit to the shrine... Where is that weird droning noise coming from? 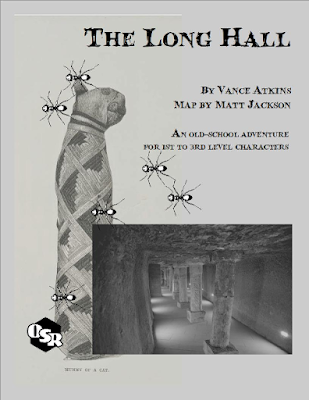 Some bad related news: Matt Jackson took a serious fall last week, ending him up in a trauma unit with numerous d6 in falling damage. Been receiving updates from his family, and now, thankfully, Matt himself. He has a healthy shopping list of injuries, but nothing that won't mend. That said, he's at the beginning of a long road of recovery and rehab, but I suspect it's hard to keep an old soldier down. So if you know him, feel free to drop a line of support, prayers to an appropriate deity, and/or good thoughts.

Oh, and I received an Honorable Mention in the One Page Dungeon Contest, (again, with a "Matt Map") so there's that.