Well, after the events recounted in last week's post, it was time to lift the hood on the adventure and do some tuning. 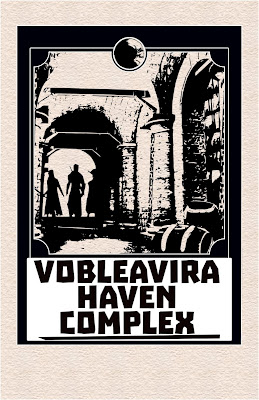 The Haven has some good bones, for sure. The map is a great foundation, with multiple looping paths for exploration, alternative routes, and order of discovery. With the idea of the B1-inspired stronghold/base in mind, I made an attempt to give every room a purpose. I'm sure some work better than others, but there it is.

As I mentioned in the previous post, for the convention game I'd thrown in the element of the restless/accursed spirit to give the players a focus or stressor, rather than just providing a scenario of wandering around and poking into rooms. Since it worked so well, the ghost needed to become a permanent cast member. Therefore, I needed to create a more cohesive reason for it to be roaming the halls. Since I'd already hinted at the cleric's dabbling with forbidden knowledge, it didn't take a lot of content modification to make sense of the ghost. Adding some color language and appropriate journal pull-quotes, as well as an artifact-object completed the scene.

Other bits and bobs:

I'm pretty happy with it, although we all know that's a low bar. Hopefully a few more adventurers get to crack open the front door and explore the complex' secrets.

The latest and greatest(?) version is currently on DriveThruRPG for those so inclined...