A quick visit to The Weary Wench

That Jackson fellow drafted up a cozy tavern while on vacation.

“This is a little place in Scaldwater called The Weary Wench. Skavos, a large burly lumberjack, serves awesome clam chowder (just like I had yesterday at The Warren Tavern!) and can tell you a tale or two. So pull up a stool, drop a couple silver on the bar, and enjoy a good bowl or two.” 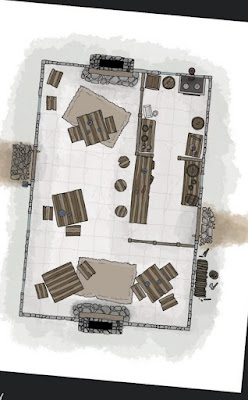 So - a one-hour (more or less) writing exercise to fill it with backstory and local color.  Here ya go:

Skavos bought the place after losing three fingers of his right hand in a felling accident. Not much use for a 'jack who could no longer swing an axe. But one thing he still had was his maw-maw's recipe for chowder. So he slicked his hair back, put on an apron, and fired up the stove.

The establishment is unassuming, but cozy. Rough-hewn tables and bar are slowly getting smoothed and polished from the constant rubbing of elbows, thumping of tankards, and spilling of food. Skavos trundles between the bar and kitchen like an affable bear, shouting greetings and winked admonishments to both guest and employee in equal turn. In addition to his prized chowder, guests may partake of bread, roast root vegetables, and boiled eggs. Behind the bar are a few casks of passable ale, although Skavos keeps a keg of decent perry under the bar for those who know to ask.

He's helped around the tavern by any or all of three employees, depending on the night and the crowd: Ellowyn, his daughter, who inherited both her father's build and joyful presence. “Mad Mary,” an orphan dropped at the dock two years back, who converses both with the customers, and the voices in her head. And young Peter van Kuik, who divides his time between splitting wood and tending fire at the tavern, and riding as a courier out past the town gates.

Skavos' ears are as sharp as his wit, and one hears much coming though a little port like Skaldwater. Peter occasionally whispers of the packets he carries out to the redoubts and hamlets along the trade road, as well, in spite of being sworn to strict confidence... Given a good night and a discreet tip, or some good information in return, Skavos is well known as a clearinghouse of information and tales. Once the evening rush has settled a bit, he wipes his hands and starts in on a tale imparted from some sailor or caravaneer...