Mini-Review: Ibn Fadlan and the Land of Darkness

Time for a brief look at a time and place in history that passes under the radar in too many history classes (Really, does anyone learn anything in a history class, particularly high school?).  That is - parts of the world that are not Western Europe at some time between the end of the Roman Empire and perhaps the Renaissance.

Anyway, I believe that this particular book came onto my radar via +Matt Jackson in some post or discussion regarding Viking history and influences.


Good read - it is primarily excerpts/fragments from Ibn Fadlan's travels, as well as many other Muslim authors in the 900's thru 1100's.  The authors/documentarians are traders and missionaries, intent on building relationships through both commerce and conversion. And gaining intelligence on these mysterious, intimidating folks from the north lands that spend half the year swathed in dark and cold.  The authors who traveled north during the cold months write of their hardships in great detail - voluminous furs and clothing, frozen rivers, difficult transportation, short days.

While the book is best(?) known for Ibn Fadlan's very detailed description of an authentic Viking ship-burial, the passages also document early conversion of Turkic tribal leaders to Islam, Jewish trade networks extending to China and the Asian subcontinent, even an early description of the Polish city of Krakow. Speak of interactions and vibrant trade between cultures and religious groups: Muslim, Jewish, Christian, 'pagan' faiths. It's a good document regarding interaction with the Rus (Swedish Vikings who settled Russia, became traders, and gave the country its name), as well as a glimpse into the travel and trade of west Asia, Asia Minor, and Eastern Europe pre-Crusades.

Like many similar texts, the collection is a mix of observation and myth/hearsay.  The writers provide detail of the peoples who they interact with, and speak of both commercial enterprises and the commodities of areas, as well as describing mythical locales and people as Alexander's Wall and the tribes of Gog and Magog.

Briefly - this is a snapshot into a lost(?) period of history - documenting a significant north-south interaction between Asia Minor, the Mideast and Eastern Europe/Western Asia through both trade and conquest.

Anyway, a great glimpse into a generally little-known slice of history. And its a Penguin Classics, so is heavily footnoted and referenced.  Also have Travels of Ibn Battutah on the to-read pile. 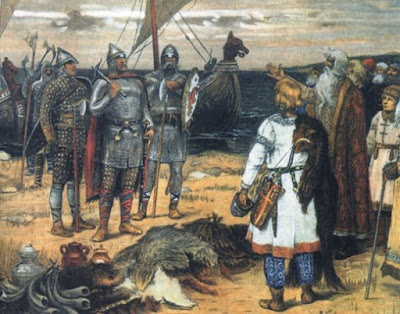 Side note: Although the 'Viking age' lasted from around 700-1100, there is an under-appreciation of the influence of the Vikings, particularity as traders. While the western (Danish/Norse) Vikings may be more familiar as the stereotypical raiders - assaulting coastal and river cities from the British isles to Spain, the eastern (Swedish) Vikings found their portion of northern Europe and western Eurasia to be less ripe for the picking, and became traders and settlers, assimilating into the Slavic tribes they encountered in modern-day Russia (and lending their name - the Rus - to the region). These Rus interacted and traded to the west, east, and south. particularly through the lucrative fur trade of the time.  Remnants of this trade are documented by the presence of silver dirham coins, minted in Islamic lands and found in silver coin caches throughout Europe, with some coins found as far as the British Isles and Iceland.  Not all interactions were peaceful as the Rus fought with local Khazar Turk populations over control of the Volga and Dniepr Rivers, particularly for access to the Caspian and Black Seas, and Rus forces traveled as far as Constantinople, attacking the city and forcing a treaty in the 900's. (this is a disjointed and very cursory overview of the time, I'm no historian...)

Update:  A great BBC interview/synopsis of the 'Volga Vikings' recommended by +Jon Salway
(FYI: The mentioned Byzantine trade treaty with the Rus stated that no more than 50 Rus could enter that great city at a time, and that they had to check their weapons at the door...)

Game material: As always, names of groups can be high-graded/bastardized for that barbarian horde at your campaign's borders or trading community.  The descriptions of communities, traditions, trade, and environment provide color and seeds for adventure, a picture of how groups may interact alternatively belligerently and peacefully.  Plus the book provides many descriptions of rituals and myth for color, and of course, that description of a final surviving Viking warrior who climbed a tree and stabbed himself to death rather than being captured.